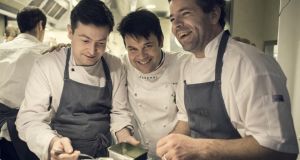 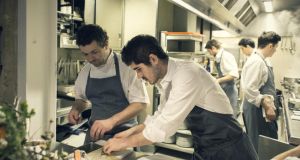 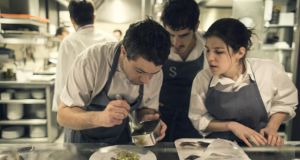 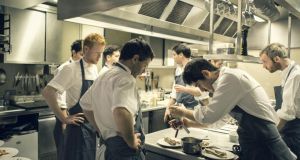 “This time yesterday, I was terrified we weren’t going to make it. A brand new, 20-dish Irish menu in a French kitchen? With 120 covers? This just isn’t going to happen.” At the end of Irish chefs Enda McEvoy and Conor Cockram’s first dinner service in St Germain des Prés bistro Semilla, this is how Cockram felt.

But it did happen. And then it happened again the next day, and the next. And 520 covers and two consecutive double shifts later, the Irish rugby team was not the only one to triumph in Paris this St Patrick’s weekend.

It all started with one of those “Wouldn’t it be brilliant if . . .” conversations with Donal Doherty of Harry’s Bar in Inishowen, and creator (amongst many other ventures) of one of Ireland’s most inspirational farmers’ markets.

Wouldn’t it be brilliant, we mused, to showcase new, modern, Irish produce, culinary skills and creativity by setting them, literally, next to their French counterparts at the heart of the world’s greatest food destination?

Five months later, everyone required to make it happen, in Ireland and France, had not only answered “yes” to the question, but had delivered what was needed for the idea to become reality.

Fáilte Ireland provided support for the Galwegian chefs (with Eurotoques chef Mark Moriarty also joining McEvoy and Cockram) Tourism Ireland and Bord Bia in Paris came on board with a French media campaign and Irish produce support for the restaurant’s buying team.

Just like Semilla chefs Éric Trochon and Matthieu Roche, the Irish chefs thrived on the creative tension of planning a deceptively bare minimum, adapting to the kitchen’s constraints, then letting the day’s market produce drive the rest.

Seeming impressively cool (even by Parisian standards) they tipped up in St Germain with their bags full of Irish woodruff and ramsons, took a couple of hours to get their bearings in Semilla’s kitchen, a couple more choosing produce from French kitchen gardening legend Joel Thiebault at the fantastic Marché President Wilson, then got down to work, and did not stop for four days.

Semilla is one of Paris’ s celebrated new bistronomic breed of restaurants, where reliance on cream, butter, wine-based sauces and rich glazes and reductions are replaced by pared-back menus, highly influenced by Japanese cuisine. Here, raw rules, and the food is served as fresh and “alive” as possible.

But unlike many take-it-or-leave-it ego-filled tasting menus, Semilla’s is broken down into raw, plancha (grill), roast, steam and sweet, with four or five choices in each category. A challenging categorization for the Irish chefs, but one which suited their sensitivity and our Irish produce perfectly.

Fingal Ferguson’s charcuterie accompanied many “petits verres” as diners arrived. Frank Hederman’s delicate smoked salmon and soused and smoked mackerel were nudged gently by nasturtium, cucumber, horseradish and sorrel. Along with Irish beef tartare with ramson berries and Hederman’s superb smoked crème fraiche, these were the stars of the raw starters.

But it was the St Patrick’s day menu, with a tasting trio of smoked haddock velouté, oysters and salmon; a light and deeply aromatic Irish stew; an inspired, earthy egg and brassica composition; Coolea, Milleens and Cashel Blue cheeses, and exquisite goats’ curd, elderflower sorbet and poached rhubarb dessert that really blew away Semilla’s regular customers, as well as invited journalists, and visiting French chefs.

It was a rich experience for everyone, from the serene-on-the-surface professionalism of a suddenly bilingual kitchen, through the seamless transition of Semilla’s usual French offering to all-out Irishness, and the efficiency of co-operating Irish agencies.

Conversations were started and curiosity stirred around modern Irish food from the French side, and debates on Irish hospitality, food policy and ethics were also begun (mostly, fittingly, at the terrasse of Les Deux Magots) amongst the Irish attending.

“We’re on our way” is one of the lines from Fáilte Ireland’s heartstring-tugging, St Patrick’s day video-gone-viral, which helped us all forget our worries for a while on a great weekend for Ireland, and perhaps one of the best to sum up what we’ll take away from it.

Ask the Expert: My husband has a very short fuse with kids

From Ireland to the US: a brief migration history