A free fishing trip and feast for kids – what’s the catch? 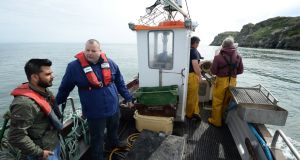 “We’re mad about getting more kids eating seafood and Irish produce.” Gareth “Gaz” Smith, chef owner of neighbourhood restaurant Michael’s in Mount Merrion, is putting his time and his money where his soundbites are. That means giving up his Sundays to get youngsters out fishing, learning about seasonal Irish produce, and cooking and eating it too.

On April 22nd, he is trialling the first of a series of hands-on days out with children between the ages of 10 and 14 years that will see them go fishing on a boat out of Howth, meeting specialist veg growers Maria Flynn (Ballymakenny Farm) and Marita Collier (Drummond House Farm) and being introduced to the delicious things they grow.

Participants will then head to Mount Merrion be shown how to prepare the seafood and veg, and then eat it, at Michael’s. There will be no charge for this outing, or for the cookery class. The pilot day, June 22nd, is already booked out, but you can register interest for the same programme on May 20th, June 24th and July 15th by emailing info@michaels.ie. Places will be limited, so early application is advised.

“I think we’ll get a lot of goodwill from doing it, and the more focus on fish, the better for all of us seafood joints. Everybody said we were crazy to do free seafood September, when we didn’t charge for children’s portions, but people appreciated it and have supported us since,” Smith says.

“The only thing that might change is the actual fishing part – any sign of troubled seas and we won’t go out, we’ll buy from the fishermen instead.”

As for his reasons for being so determined to get children eating more adventurously, Smith says: “I grew up in a massive council estate in the UK, I didn’t eat anything exotic like pasta till I was 17, let alone fish or veg. It was turkey twizzlers and waffles with beans, so it’s close to my heart.”

Irish tech company Drop is to integrate its kitchen operating system with Kenwood’s kCook Multi Smart food processor, meaning you can control the machine, which both processes and cooks, remotely, via a smartphone and the Drop Recipes app.

Drop’s launch product, a smart scales which hooks up with the company’s impressive recipe archive, has been followed by appliance partnerships with Bosch and GE, whose ovens can be controlled remotely via the app. Drop Recipes features dishes from partners including Food52, Good Housekeeping and Irish chef, author and TV presenter Donal Skehan.

“Kenwood’s kCook Multi Smart will intuitively know the right settings – the temperature, the time and the cooking style and speed – for any given recipe on our platform. Creating anything from soups and stews through to risottos and curries has just become accessible to everyone, no matter their skill level in the kitchen,” says Drop chief executive Ben Harris.

The Multi Smart machine, which is the first in a series of Kenwood appliances that will be powered by Drop technology, will go on sale in France this month, with international availability later in the year.

Rosleague Manor in Connemara is celebrating 50 years in business with an offer price €220 for a one-night stay for two people, including a five-course dinner in the restaurant, which specialises in local shellfish and Connemara lamb. It is available until October 29th.

The house was purchased in 1968 by Isobel Foyle, who, together with her children Anne and Patrick, converted it from a six-bedroom home to a 20-bedroom business with a dining wing and conservatory. It is now owned and operated by Edmund and Mark Foyle, and Mark is the third generation of the family to manage the hotel. Rosleague Manor is a member of Ireland’s Blue Book collection of special places to stay.