A 10% stout that tastes lovely and light? White Gypsy is on the case 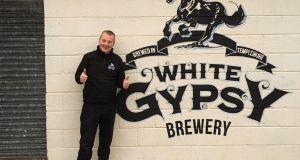 Cuilan Loughnane is one of the most experienced craft brewers in Ireland, having started brewing in the late 1990s, before founding White Gypsy in 2009. He is one of the most interesting brewers, too, constantly coming up with new off-beat experiments. Most importantly, he is a great brewer.

Since I first met him, he has been obsessed with reinventing Irish stout. “The Americans reinvented pale ale, the English their bitter and pale ale, the Germans their pilsners, but nobody here has taken our unique style, Irish stout, to another level.

“I’ve had this vision for Irish stout for a long time; there are lots of imperial stouts around – they are flavoursome for the first and second sip, but halfway through, your mouth clogs up with flavour. With a great wine it’s refreshing. The more you drink, the more you want to drink. It’s light and flavoursome. These big beers win awards because the judges only take one sip – but they have no drinkability.” He wants to produce a stout with 10% ABV yet keep “a lovely light flavour”.

“I had no real answer until I went to the rugby in Japan last year. I went to a sake brewery, tasted it and straight away I thought, This is what I have been missing all these years.”

Finding the rice was a challenge, but he managed to persuade a brewery to hand over a ton of sake rice. It left Tokyo on March 1st, and is currently in Rotterdam. “You have to push the boundary all the time. We have no choice as a small craft brewer.” I tell him I’m fascinated to see how it turns out. “So am I,” he says.