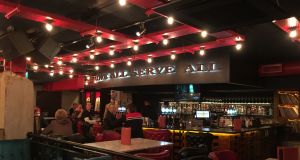 Hard Rock Cafe Dublin - “love all serve all” at the bar

As you walk into Dublin’s Hard Rock Cafe, just reopened after refurbishment, one big thing hits you. Or rather, doesn’t hit you. U2’s famous Trabant from its Achtung Baby/Zoo TV days, which has been suspended from the ceiling since the Dublin franchise opened in 2004, is gone. And there’s the U2 wall of memorabilia: it’s mostly gone too. In their place is a massive range of other music collectibles.

Today the Trabant, along with most of the rest of the U2 stuff, is in storage in Orlando, where its owner, the Hard Rock Cafe Inc, which was bought by the Seminole Tribe of Florida in 2007, will assess if it needs attention before being sent on its way to some other venue in the worldwide chain.

Every decade or so the franchise chain changes the memorabilia in individual cafes, hence U2’s departure from Dublin, to be replaced by new items, from Paul McCartney’s black leather Beatle boots to Nicki Minaj’s custom-made bodysuit from 2012, to Phil Lynott’s guitar.

The Dublin Hard Rock Cafe, on Fleet Street, Temple Bar, occupies two floors on the corner beside the Morgan Hotel. It has been closed since January while it was refurbished by the Dublin franchisees, Entertainment Enterprises (“EE”) Group, Colum and Ciarán Butler’s leisure and entertainment business which also runs Starbucks, TGI Fridays, and Dante’s and Mao restaurants.

HRC Dublin opened its doors again to the public on Monday with a new look. Gone are the hard wooden seating and crowded walls of artefacts. The new vibe could be called luxury rock den chic, with exposed red pipes and metalwork on the basement ceiling, upholstered brown, tan, and red leather chairs and banquette seating, subdued lighting, dark wooden tables and several booths.

The chain’s various mottos (“all is one”; “save the planet”; “take time to be kind”) are in red neon on walls, with another slogan over the bar “love all serve all”. There is rough, bare wooden panelling, and rather cool feature wallpaper with designs including overlapping rock concert posters, rows of bottle caps or tattoo designs.

The shop area on the ground floor is larger – partially because the Trabant is no more – and there’s the usual selection of t-shirts, scarves, caps, shot glasses. U2 lyrics from One  are displayed above the merchandise, in red neon. The HRC pin selection includes a large new one for the Dublin store, featuring four provinces, which detach from each other, and another designed by a staff member.

Manager Paul Brennan shows me round. It’s no longer just hard rock – for either the music or the memorabilia – and lots of millennials feature, including Justin Bieber on the playlist.

Presentation of the memorabilia is more subdued and than before the refurb, with most of it in lit glass display cases on the wall, protected from paws or pinching (though the glass sometimes leads to glare when customers want to take pictures).

There’s a Jimi Hendrix shirt, a jacket from The Who, a Run DMC hat, Madonna’s shoes, more shoes from Aerosmith and Styx, Tina Turner’s (surprisingly plain, but authentically hers) tailored black shirt, AC/DC’s hat, Eminem’s trainers, the “Mr Scary” guitar from George Lynch (Dokken and the Lynch Mob), the cornet from Strawberry Fields and Hey Jude. Plus guitars from Marilyn Manson, the Police, Def Leppard, Motley Crue; and jackets from Bon Jovi, Billy Joel, Jimi Hendrix, The Who.

Photos include a young Debbie Harry, and one of Elvis with Jerry Lee Lewis and Johnny Cash. The white Elvis hat was not Elvis’s but a crew member’s.

There’s a mini Cranberries wall in one of the booths, including the handwritten lyrics of In the Ghetto, on Grand Hotel Baglioni notepaper.

Brennan thinks the biggest draws will be Phil Lynott’s bass guitar - “we’ve never had anything from Thin Lizzy before”, Nicki Minaj’s bodysuit and Michael Jackson’s unlikely t-shirt - this is a slim black number embroidered with daisies, from his Jackson 5 days in the early 70s.

The large selection of memorabilia – it’s “priceless” – belongs to HRC’s worldwide collection, which it installs locally, moving the items from cafe to cafe to freshen displays.

A couple of special items belong to the local HRC rather than the Florida corporate – the drum kit donated by Aslan when the Dublin outlet opened in 2004, now in pride of place at the bottom of the stairs, and a recently assembled vinyl collection – Brennan reckons more than 5,000 albums (from Top of the Pops 1981 to Barry Manilow) – on shelves, creating a wall of records.

HRC has live music at weekends and there’s a good new stage area downstairs all set for the Battle of the Bands running through June.

Brennan says the HRC vibe is great when U2 plays in Dublin, and in the past they had to warn customers who wanted to sit by the U2 wall that others would be gawping and taking pictures as they ate.

On the stairwell a few U2 items stop customers as they descend to the basement bar, including a pair of Bono’s glasses. I, too, stop to take a picture of them (though the glare from light reflecting on the glass case is a problem). So U2 have not entirely disappeared from the swanky new Hard Rock Cafe in their home town.

Lastly, let’s not forget the food. The food is not what people go to a Hard Rock Cafe for, but most customers do stay to eat. The menu is pretty much the same in all HRCs, and while the menu is online, prices are not. The  busy Dublin kitchen produces a large selection of freshly made American, particularly southern, staples, from pulled pork to club sandwiches to nachos; burgers (€17-21) and steaks (€25-30); barbequed ribs and chicken (€23-25); mac‘n’cheese (€17.75), fajitas (€22-27). There’s a full bar, including lots of cocktails, mostly around €10. For an extra €10 or €11 you can keep a glass.

Some 82 people – Irish and international, sometimes moving from HRC to HRC abroad – work in Dublin, and mornings in the cafe-come-mini rock museum begin with a pep talk: “we are the artistes, this is our venue, guests come to see us perform”.