The famine-era emigrant who became the greatest showman

Extraordinary Emigrants: Captain Paul Boyton was known as ‘the Fearless Frogman’ for his daredevil feats 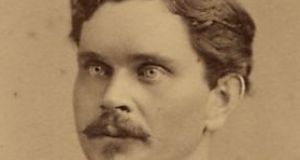 “I began my voyages on October 1874. Sailing from New York on the Queen of the National Line, Captain Bragg in command, my object was to jump overboard when we were two hundred and fifty miles from the American shore.”

So began the first of countless journeys undertaken by Paul Boyton, a famine-era emigrant from Rathangan, Co Kildare who would become one of the greatest showmen of his time. Known as "the Fearless Frogman" he conducted daredevil feats in open water while enveloped in a vulcanised rubber suit. This suit allowed him to float on the water and he could propel himself with the use of an oar. Convinced the device could save hundreds of lives if its existence was more widely known, he conducted a series of high-profile stunts in the hopes of attracting media attention.

His maiden voyage did not go to plan. Boyton had previously approached several ships’ captains in the port of New York who refused outright to allow a man to willingly leap from their vessels into the open ocean hundreds of miles from land. So to avoid any further rejection, he had boarded the Queen as a stowaway and hidden in an unoccupied bunk until the following evening. Arriving on deck he quickly changed into his suit, which included a waterproof rubber bag filled with 10 days’ provisions, and strapped a double-headed axe to his waist which he planned to use to fend off shark attacks. However, before he could make it to the ship’s railings, Boyton was discovered by a member of the crew who detained him.

Captain Bragg had him confined to the crew quarters until the ship had reached the Irish coast. However during the voyage, Boyton, who was a former naval yeoman and lifeguard, managed to convince the captain to allow him to test his apparatus before they docked at Queenstown (Cobh). On the evening of the October 21st he plunged into the ocean as night was falling, with the beacon of Cape Clear lighthouse in the distance. A strong gale had begun to blow as Boyton began to head toward the shore. After two hours at sea the storm grew fiercer and he became disoriented having been frequently submerged by colossal waves. At 3am Boyton realised he was approaching the shore and made for the base of some sea cliffs he could just distinguish in the distance. After making his ascent he headed inland reaching the village of Baltimore.

His arrival, during a gale and clad as he was in his full-body rubber suit caused quite a stir in the isolated settlement. The first person he encountered was the local coastguard who, after hearing his account, felt assured Boyton was suffering from concussion following a shipwreck.

Word of his exploits travelled like wildfire along the coast of Cork and when he finally made his way to Skibbereen to send a telegraph to Captain Brigg assuring him of his survival, he was met by a large crowd. His story was picked up by the New York Herald and had soon earned him international fame.

The following year would see him cross the English Channel and later the Straits of Gibraltar. His longest journey would come in 1881 when he navigated a 3,580 mile stretch of the Mississippi river. In total he is said to have paddled more than 25,000 miles during his career.

An astute self-publicist, Boyton would often have journalists accompany him on his expeditions and was always seeking new ways to gain media attention, even showcasing his suit aboard the Royal Yacht in front of Queen Victoria during a visit to Great Britain.

In 1887 he toured with P.T. Barnum’s “Greatest Show on Earth” where he regaled audiences with his aquatic feats in a specially constructed artificial lake. After retiring in the 1890s, he opened what many consider to be the world’s first water park “Paul Boyton’s Water Chutes” in Chicago, which was followed by his “Sea Lion Park” in Coney Island a year later. Today Boyton is largely forgotten, though the survival suits he helped to popularise are now worn by deep sea fishermen and submarine crews worldwide and have saved countless lives.