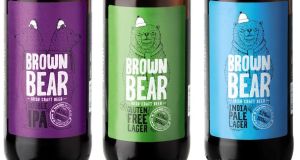 The Brown Bear range at Aldi includes an IPA, gluten-free lager and IPL

Some new beer styles are a bit like “fusion food” – a handful of this and a pinch of that, and here’s an Asian-inspired lasagne burrito. The India pale lager is as wishy-washy as they come, apparently blending US and European brewing traditions but not really meaning anything at all.

The IPL – as it’s known – could be loosely described as a light pale ale with some characteristics of a lager. It may (or may not) use a lager yeast – which is what differentiates lagers from ales – and it may (or may not) use American hops instead of Czech or German hops which are more common in a Pilsner. These kinds of style mash-ups can get a bit confusing for consumers at times, but all is forgiven if the beer tastes good, of course.

You’ll find an IPL among Aldi’s new offerings from their Brown Bear range of beers made by the Station Works Brewery in Newry, Co Down, which is also behind the Foxes Rock and Kentucky beer brands. This is a medium-bodied, 5.2 per cent lager, that comes in a 500ml bottle for €1.99. There’s more of a sweet, grainy aroma than hoppy one to this, and overall it veers more to the lager side of things with a crisp, easy-drinking finish.

Also among the Brown Bear range is a 4.1 per cent gluten-free lager. This is a good, clean and light-bodied lager with a gentle bitter finish that makes for a very decent gluten-free offering.

Brown Bear’s double IPA comes in at 6.3 per cent, which technically makes it more like an IPA (DIPAs are usually around 8-10 per cent, and beyond). Priced at €2.39, it pours a bright coppery colour and there’s a hint of citrussy hop aroma that quickly disappears. There’s a bit of sweet orange and grapefruit in the flavour but overall it’s a bit uninspiring – a little too much maltiness and not enough hoppiness.