Fionn Davenport on ... the places in between

"A couple of weeks ago I took my first ever London bus journey. Ok, not quite on a par with scaling Kilimanjaro but riding the top deck of the 189 from Cricklewood to Oxford Circus was memorable, if only in a way that was obvious to me alone." 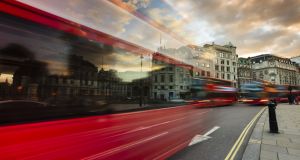 A couple of weeks ago I took my first ever London bus journey. Ok, not quite on a par with scaling Kilimanjaro or going sky diving (two on the bucket list) but riding the top deck of the 189 from Cricklewood to Oxford Circus was memorable, if only in a way that was obvious to me alone.

Until then I’d been strictly a Tube man, ever since my first visits to London as a nervy, eager teenager. I was a mini-Magellan of the underground, excited by the prospect of figuring out those less-obvious connections (Maida Vale to Old Street: 10 stops, two changes and plenty of tunnel travel in between). And while I became fairly adept at negotiating London below ground, I had no sense of the city above it – I knew that Camden and Islington were north of the Thames and that the best stop for the curry restaurants of Brick Lane was Aldgate East, but I couldn’t tell you how far away any of these places were from, well, anywhere.

I took the bus because I was late and it was raining, and I didn’t fancy walking the half-mile down the wonderfully named Shoot-Up Hill to Kilburn. I sat in the front seat, with a perfect view of the road ahead: down Kilburn High Road and then left down toward St John’s Wood. It was my first time on this road, but halfway down everything became instantly familiar. I’d seen the pedestrian crossing before. I checked the name of the road and sure enough, I was on Abbey Road. Schedule be damned, I jumped off the bus and stood on the edge of the road, watching a group of Italian visitors recreate the famous album shot – one even took his shoes off, Paul-style, for maximum authenticity. A small moment, yes, but a pleasant one, born out of unexpected surprise.

If I were to collect my most memorable experiences while travelling, a disproportionate number of them would be of that kind – unexpected moments that happened on my way somewhere. On a grand scale, they’re the experiences described by travel writer Rory Stewart in The Places In Between, his riveting account of his solo walk across Afghanistan in 2002, around the same time as the US invasion. It is a masterpiece of travel narrative, populated by encouraging warlords, Taliban sympathisers who exercise admirable restraint in not shooting Stewart and a mottled dog called Babur who accompanies him for the second half of the journey.

Ever since reading the book, I have tried to remain mindful of my own places in-between. To remain unblinkered by the goal and to treat delays and detours as opportunities rather than irritating inconveniences. I have crawled and stumbled my way towards living that truth, but I have got there on occasion.

A couple of years ago, while visiting New York, I went to see the Mets play baseball at Citi Field in Queens. The stadium is in Flushing-Meadows Park, one of the largest in the city – it is also home to the USTA Billie Jean King National Tennis Center and hosted two world fairs, in 1939 and 1964. After the game, I went looking for an Italian restaurant highly recommended to me by a friend. I had an address, but was unfamiliar with the neighbourhood, Corona, a multi-ethnic melting pot that was once home to substantial populations of Irish, Italian and African-Americans. It’s a fairly plain residential neighbourhood, the bulk of the houses reminding me of the one used in the TV show King of Queens, (which was set in neighbouring Rego Park, even though the house itself is in New Jersey).

Hungry and more than a little frustrated, I asked for directions to the restaurant, but nobody seemed to know where it was. Eventually, I found myself standing in front of a redbrick house at 34-56 107th Ave. There was nothing to distinguish the house except for a small plaque at the front, indicating that this was the house that once belonged to Louis Armstrong. One of the greatest musicians of the 20th century, a giant of jazz and the outstanding soloist of his era, lived here from 1943 until his death in 1971, in a plain house in an unfashionable neighbourhood of Queens, far from the fanfare and bright lights of fashionable New York.

The house is now a museum, little known and barely visited, but what thrilled me the most was that inside everything had been left pretty much as it had been when Satchmo lived there. I never found that Italian restaurant. Instead, I found my favourite museum in New York. It’s all about the places in-between.