What has the first male editor of Vogue done with the iconic magazine?

Edward Enninful, the first male editor in the 101 year history of Vogue, is off to a good start 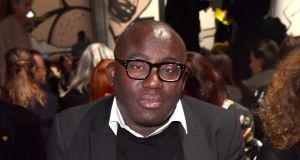 The new British Vogue, edited by Edward Enninful, its first male editor in its 101 year history, hit the newsstands in a storm of publicity. Photograph: Jacopo Raule/Getty Images

The new British Vogue, edited by Edward Enninful, its first male editor in its 101 year history, hit the newsstands on November 11th in a storm of publicity. With his promise to make it more inclusive and representative of today’s Britain, its appearance followed the controversy over outgoing editor Alexandra Shulman’s departure after 25 years at the helm.

The new issue is certainly a change, its cover star the supermodel and activist Adwoa Aboah, founder of online community Gurls Talk who in an interview in the magazine says that she loves “being a mixed race woman in 2017 – I feel part of something big”.

The editor’s letter (which comes after 66 pages of ads) claims that this first issue “is a tribute to our country and to a group of people who brilliantly represent it at home and on the world stage”.

The fashion is sharp and fresh with a quirky feature styled by the new fashion director Venetia Scott entitled  “Remain”, with its message “a search for the national soul” photographed by Juergen Teller, as well as a feature modelled by a new generation of actresses.

Elsewhere Zadie Smith profiles Queen Elizabeth, arguing that her image is distinctly lower middle class. She “ found what suited her and stuck to it”, says Smith, recounting her’s one and only encounter with the royal in Buckingham Palace. There is a terrific interview with the formidable Glenda Jackson while well known designers including Simone Rocha, Jonathan Anderson, Victoria Beckham and Christopher Bailey recall their childhood homes and escapades.

Former editor Alexandra Shulman, who was interviewed by the Guardian a few days ago, did herself and her legacy no favours in the continuing controversy over provocative remarks, and appeared oblivious to the lack of black cover models and issues of diversity in all her years in control. The interview with Decca Aikenhead stirred up a Twitter furore over what was widely perceived as Shulman’s “unconscious racism”.

Meanwhile Enninfull, now one of the most powerful editors in magazine journalism and a far more approachable and friendly character than his predecessor, told the Financial Times that the days of “being frosty and stand offish are over... she had her Vogue – I’ll have mine”. The next few issues will tell whether he can deliver what he hopes and boost figures and print circulation, but it’s a promising start.