It is said the stitches in Aran jumpers were like unique family crests. Could this be true? 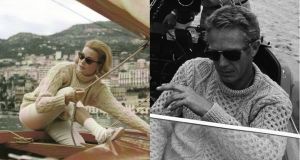 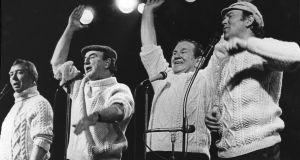 The Clancy Brothers and Tommy Makem in 1984. Photograph: Eddie Kelly

We all know what urban myths are, and the same ones tend to turn up again and again. Like the old chestnut one of the driver picking up the hitch-hiker. He drives her to the destination, but when they get there, she has vanished. When he goes to knock on the door, the person who answers says that the woman who lived there died years ago, in a road accident just where the driver picked her up.

We all know Aran jumpers; big chunky Irish geansaís, most traditional when hand-knitted from unbleached báinín wool. Originally worn by working fishermen, they also became popular fashion garments in the US for a time. Grace Kelly had one. So too did Steve McQueen. The Clancy Brothers wore them while performing in the US, and mighty hot they must have been too. The Aran knit is continually being reinvented to this day in the fashion industry.

Hand-knitted Aran jumpers are, of course, the most expensive kind, although most of the jumpers sold commercially in tourist outlets are machine-knit and not all of them knit in Ireland either. Whether handmade or machine-made, what all Aran jumpers have in common are the stitches used in the knitting. There’s cable, moss, honeycomb, blackberry, diamond and basket, as some of the most frequent kinds of stitches.

Here’s where urban myths comes in. The story goes that each jumper knit for fishermen in the Aran Islands had a different combination of patterns: one unique to each family. In the (sadly frequent) event of a fisherman dying in heavy seas in the fragile craft of a currach, the body could be identified when washed up, by the specific stitches in the jumper. No matter how long the body had been lost at sea, the pattern of his Aran jumper (fishermen were always male), would have endured.

In the same way that urban myths get passed on the retelling, often subtly altered each time, this particular myth appears to have started with a careless reading of John Millington Synge’s play, Rider to the Sea. Nora, the sister of vanished fisherman, examines a sock taken from the body of an unidentifed man that has been found.

“It’s the second one of the third pair I knitted, and I put up three score stitches, and I dropped four of them,” she says in grief. So the original story referred to a sock, not a jumper, and even that story was from a play, not a true event.

Yet visitors on holiday, particularly Americans, continue to attempt to seek out “family” patterns, for instance, an O’Flaherty patterned jumper. They don’t exist. Does it really matter? Aran jumpers, especially the hand-knit ones, are still lovely examples of an old craft.