Diaspora Deenihan: ‘I have to move fast’

The first Minister of State for the Diaspora has no more than 20 months to make an impact. So what are his priorities? 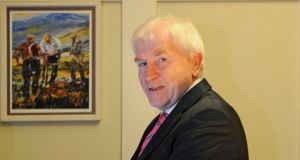 Jimmy Deenihan: time is of the essence. Photograph: Dave Meehan

The bookshelves of Jimmy Deenihan’s new office in the Department of the Taoiseach are still empty, but on the desk of the country’s first Minister of State for the Diaspora lies a signed copy of Tim Pat Coogan’s Wherever Green Is Worn. Fourteen years after its publication, it is still considered the most comprehensive book on the Irish abroad.

Deenihan has a long-standing interest in emigrant issues. “When you are born in a county like Kerry, with such a huge diaspora, even from within your own family circle, you are connected with the Irish abroad from birth,” he says.

It was through his early career as a Kerry footballer, in the 1970s, that Deenihan first came in contact with the Irish abroad, when he travelled to the US and UK to play. On entering the Dáil, in 1987, Deenihan and Jim Higgins, his party colleague from Mayo, became Fine Gael’s “self-appointed spokesmen” for emigrant affairs.

Through the late 1980s and early 1990s Deenihan travelled many times to the US to meet people campaigning for immigration reform to benefit the thousands of Irish without legal status. He was involved in negotiations for both the Donnelly and the Morrison visa schemes.

So what will be his remit as Minister of State for the Diaspora? For the past four months the Department of Foreign Affairs has been consulting organisations and individuals with an interest in emigration issues to review how Ireland can better engage with its communities abroad.

Based on the responses, a new “diaspora strategy” action plan, due in September, will cover topics ranging from welfare support for vulnerable and elderly emigrants to business and tourism schemes and social-media initiatives to engage younger emigrants.

“There’s an awful lot already happening,” he says. “I have always said that as a country, for various reasons, we didn’t maintain that connection [to the diaspora] to the extent that we maybe should have. But we have improved considerably.”

Since the publication of the report of the Task Force on Policy Regarding Emigrants in 2002, a dedicated Irish-abroad unit has been working in the Department of Foreign Affairs to co-ordinate interaction with organisations working with Irish people around the world. Funding for these groups has been provided through the emigrant-support programme, amounting to €115 million in the past 10 years.

He cites other State-sponsored initiatives that he hopes to continue, such as the Global Irish Economic Forum and the Global Irish Network, which are helping to keep business leaders connected to Ireland, and independently run schemes such as ConnectIreland, which encourages the diaspora to bring jobs to the country.

He has a few new ideas to engage with recent emigrants who have left in search of work since the downturn, including an online register where people hoping to return to Ireland could submit details of their skills. “They should know they are very welcome back,” he says.

A priority for the new Minister is the issue of emigrant voting rights. The Convention on the Constitution voted overwhelmingly last September in favour of granting Irish citizens abroad a vote in presidential elections, but the Government has yet to respond to the recommendation.

With a maximum of 20 months in office before the next general election, Deenihan recognises that time is of the essence if he is to make a significant impact in his new role.

“To implement a new strategy I have to move very fast. I realise that.”