Before you buy an e-scooter for Christmas, read this

Sales have soared as we seek alternatives to public transport. Pity they’re illegal 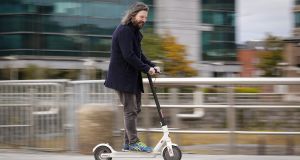 Patrick Freyne tries out an electric scooter from Dublin company Lifty. ‘It’s pretty easy to use the scooter, though any bumps in the road cause significant turbulence,’ he says. Photograph by Crispin Rodwell

I am scooting. I am a scooterist, an electric scooterist, a scootrician. I scoot majestically along God’s earth passing scooterless schmucks in their cars or on their trotters. I throw my head back and laugh as I pass, but that causes my e-scooter to wobble so I stop laughing and just whisper “ha ha ha” quietly under my breath.

In 2020, many people have taken up electric scootering. Marco Sants, the Brazilian entrepreneur behind a company called Lifty in Dublin, tells me his sales have gone up 200 per cent, primarily to people who are using them to commute.

A Garda statement on these “mechanically propelled vehicles” says: “Any users of such vehicles in a public place (as defined in the Road Traffic Act 1961) must have insurance, road tax and a driving licence ... As it is currently not possible to tax or insure e-scooters or electric skateboards, they are not considered suitable for use in a public place. There is no anomaly within the law.”

Jean Jose Garcia Molina is the founder of eRide, a community for fans of electric vehicles, and himself the owner of an electric unicycle. Occasionally members of the eRide group are stopped by gardaí, he says, but usually they are sent home with a warning. More rarely, members of the group have had their vehicles seized and have faced a court summons and a fine (though the vehicles are eventually returned). “Less than 1 per cent of gardaí would stop you really,” he says. “Most don’t say anything. They’re busier with other things.”

In some parts of Europe, electric scooters are legal and seen as an environmentally friendly, cost-effective alternative to cars or public transport. The regulations and classifications vary. Some mandate helmets, others put specific age limitations on their use (which would certainly put a damper on the laughing child scooterist I see bombing around my housing estate every evening). Many countries prohibit their use on footpaths.

It seems that the Government here is also inclined to change the law. In 2019 in Ireland, the Road Safety Authority (RSA) issued a report on e-scooter usage, and the then minister for transport Shane Ross established a public consultation process that ended in November 2019.

Regularisation is required. This month Sinn Féin TD Darren O’Rourke revealed Department of Justice figures that show an increase in e-scooter-related collisions from three in 2018 to 37 in 2020. There were also 46 road traffic offences by e-scooterists and 91 seizures of scooters by gardaí recorded thus far in 2020. These increases may be a measure of their increasing popularity rather than their danger.

In February, a study from the International Transport Forum suggested that e-scooter users face the same risk of death or injury as cyclists.

The RSA’s review is tentatively in favour of some form of regularisation of e-scooters, noting that “they have potential to reduce traffic congestion, improve air quality and promote active travel”. But it does have safety concerns, outlining a lack of data on safety and stressing the need to wear personal protective equipment and suggesting potential speed restrictions. It has also, more recently, urged people not to buy e-scooters for children this Christmas.

Since the RSA report, there’s been a new government and a pandemic, though the Department of Transport spokesperson asserts that, “The new programme for government commits to legislating for e-scooters. This will involve identifying and developing appropriate amendments to primary legislation across a range of complex areas. It must be carried out in such a way that it does not undermine the overall framework of road traffic law or road safety in general.

“Officials in the Department of Transport are progressing work to meet the commitment, bearing in mind experience internationally overseas with the consequences for road safety, the management of roads and footpaths, the movement of traffic, public transport and freight, public health/hospitals and the environment.”

Minister for Transport Eamon Ryan has said he hopes to have the legislation in place in 2021. Sants, a former car-rental company employee, has been waiting for such regularisation for a few years now.

Lifty was started in 2018 as a Dublin Bikes-type scheme for tourists. “A couple of them ended up in the river,” he says with a sigh. Subsequently he started taking his scooters directly to the renters and, over time, he also began selling them. In recent months, he says, “the phone hasn’t stopped ringing”.

Sants lends me one of their most popular models, a Xiaomi Essential, which retails at €429. It can travel at 20km an hour with a battery life that can take you for about 20km. I have trouble getting it going at first. Sants can’t figure out why.

“What weight are you?” he asks. Apparently heavy people can slow down the scooter. I feel like responding with an indignant “Well I never!” but then we figure out that I’m standing on the rear mudguard, depressing the back wheel. So I’m not too heavy, I’m just stupid.

Now unencumbered, I scoot along freely. Operating it is pretty easy once you stop standing on the rear mudguard. You propel it up to 8km an hour with your foot and then hit the accelerator on the right handle bar. On the left is a hand-activated break that looks much like a bicycle’s break.

I jerkily and slowly glide around a pedestrianised area outside the CHQ building in Dublin’s north docklands, where Lifty is based for the benefit of the photographer (though nobody has thought to bring a helmet).

Later that day, helmeted, I scoot briefly around the slightly bumpy and speedbump-filled roads of Marino, where I live, before the Xiaomi Essential gets a puncture. I ring Sants and he comes out and replaces it with a Xiaomi 1. This retails for €499, has three different gears, can go up to 25km an hour and has a battery that lasts for 30km. It feels a lot smoother to ride.

Neither model, says Sants, is completely water resistant. “A moderate rain is fine,” he says, “But if it gets heavy, you shouldn’t be using it.” This feels like a considerable drawback in Ireland.

For this reason, Sants advises people not to leave them locked on the street, suggesting, instead, the use of indoor car parks and noting that they can be folded up and carried into offices. He also warns people not to avail of cheap deals on the internet as these often come from unregulated factories. Their batteries, he claims, have a tendency to catch fire.

The next day I take it out on the road from Marino through the North Strand and into the city centre. Sants recommends that those who use his scooters wear a helmet, high-viz clothing and gloves, and also use bike lanes. I do this, though many of the scooters I pass are using footpaths and few of the users are wearing helmets. I have also, for the record, narrowly avoided being hit by footpath prowling e-scooterists back in my previous life as a pedestrian, so I slow to a crawl whenever I’m passing pedestrians even though I’m in an adjacent bike lane.

It’s pretty easy to use the scooter, though any bumps in the road cause significant turbulence. I also find that it’s difficult to lift one hand from the handlebars to adjust my helmet or even to change gears because lifting my arm causes the scooter to wobble.

Bike lanes largely seem to work fine for e-scooters, though where the traffic is heavier and the lane is on the road, I often get nervous and find myself stopping and swinging my scooter on to the path to walk with it for a while. Each time I do so, I manage to bash my ankle. The scooter is pretty heavy.

My best scooting experience is across Royal Canal greenway that runs from the North Strand to the docklands. There, I glide happily along the canal over the newly surfaced path in an insouciant manner that certainly impresses the ducks and elderly cyclists.

My worst scooting experiences happen along the quays in the city centre, where the bike lanes and bus lanes merge suddenly and scooterists find themselves sharing a space with scooterist’s ancient enemy: the bus. (Sants would like to see the city emptied of big motorised vehicles to be more fully inhabited by pedestrians, cyclists and electric scooters). I have to say, I feel quite exposed as buses rumble along a few inches to my left. I’m not sure my bike helmet is really going to protect me that much if we collide.

On the plus side, electric scooting is generally easy, environmentally friendly and efficient, and I don’t have to use my leg muscles like some sort of perspiring sucker.

But in the event of these vehicles being legalised I’m not sure if my inherent laziness will win-out over my fear of traffic.