Why is there a monument to 1,186 Irish emigrants in Toronto? 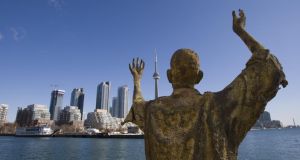 Two memorials in Ireland Park, on Éireann Quay on the shores of Lake Ontario, remember the 1,186 immigrants who died from typhoid on their way from Ireland in 1847. Photograph: David Cooper/Toronto Star via Getty Images

In a hidden corner of Toronto, between the Billy Bishop City Airport and the abandoned Canada Malting Plant, lies a monument to the 1,186 Irish immigrants who perished here from typhoid in 1847.

To the right of me is a taxi rank where a squad of bickering cabbies are shouting over the wind and trying to keep their cigarettes lit. In front of me is a dilapidated woodshed with its door hanging off and a wisteria vine creeping in through a hole in its broken window, and just opposite I can see a milk-white puddle brimming with what I can only assume is bleach or some other industrial solvent associated with the plant. Everywhere there are signs warning of some DANGER that never materialises. Surrounding the plant is an eight-foot chain-link fence topped with razor wire, and off in the distance I can see a yacht club, the CN Tower, a bunch of marina condos, and a Tim Hortons coffee shop covered with red and white awning.

Strange then that this should be the site for Jonathan Kearns and Rowan Gillespie’s ambitious collaborative memorial. Opened by then Irish president Mary McAleese in 2007, Ireland Park was commissioned to mark the 160th anniversary of the Irish Famine. It consists of an impressive 25m-long Kilkenny limestone wall engraved with 675 of the 1,186 Famine victims’ names, a glass scale-model tower of one of the nearby grain silos - meant to symbolise the ingenuity and working spirit of the landing immigrants - as well as five life-size copper models of some of the immigrants themselves: a pregnant woman in a shawl; an emaciated figure lying prostrate on the ground; a man screaming; a man hunched over with starvation and sickness; and a man with his arms raised toward the CN Tower and the yacht club marina, as if invoking, “Yes, I’m here, and I’m your responsibility”.

Since the 19th century Irish people have been arriving in droves, with more than four million of the country’s 36 million-strong population claiming either full or partial Irish heritage in 2006. After the most recent recession hit Ireland, Canada rose to become the third most popular destination after the UK and Australia for Irish emigrants. This was due in large part to an incentivisation scheme put together by the Canadian government to attract skilled, English-speaking workers to relocate to Canada.

Some of my closest friends spent time in the country, attracted by the prospect of fast work and easy money. The numbers travelling in search of work have fallen in recent years, though I can’t help but think as I sit here looking out past the five copper figures representing the Irish at their most desperate, that this could be a monument to all waves of Irish emigrants from the 1840s on: the 1920s, the 1950s, the 1980s, and of course, now. 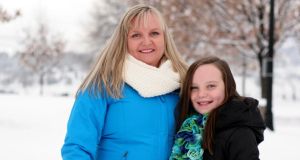 Meet the Irish who are now 'proud Canadians'

It was a subtle decision, I think, but a powerful one, for both Kearns and Gillespie to choose perishable materials for their respective sculptures. Kearns’s wall, for example, though roughly 5m in height, is made from limestone and must face a constant onslaught of weathering - the wind and waves off Lake Ontario, heavy rain, lightning, hail, freezing snow and ice. Standing back from the structure you might be forgiven for mistaking it for the impenetrable hull of some monolithic vessel. In reality it represents the fragile body of a landed coffin boat; manmade, damaged, though somehow still enduring.

Gillespie’s figures are even more fragile, wearing dilapidated copper garments like discoloured badges of honour, fusing with the Toronto soil as they weather over time. Perhaps this is to symbolise Irish integration into Canadian society, or make a point about the erasure of the immigrant’s culture. Either way, these life-size statues are the most striking aspect of the entire memorial, speaking to the resilience and power of the Irish who made it here and survived.

Ireland Park had its genesis in Gillespie’s “Famine” installation on Custom House Quay in Dublin, first unveiled in 1997 to mark the 150th anniversary of the Irish Famine and consisting of seven life-size copper figurines. The addition of Jonathan Kearns as both site architect and sculptor for the name-bearing wall in Toronto, however, adds an eerie tranquillity to Ireland Park, cut off from the freneticism of downtown Toronto by the grain silos of the Canada Malting Plant. It is as if Kearns was able to transport a sliver of sliced-off Ireland to the shores of Lake Ontario, keeping the quiet of an isolated road in the Burren or the loneliness of a trek around a rainy Lough Derg.

Visiting here alone on a quiet Wednesday afternoon, I am struck by the poignancy of the monument’s isolation. Years ago when I first read about proposals for the site in Tim Pat Coogan’s Wherever Green is Worn, I had thought of it as bigger, more central to the bustle of everyday Canadian life than the park in which I now sit, listening to the waves and the occasional drone from a light aircraft taking off.

Walking through “Strawberry Fields” in Central Park, or Peter Eisenman’s “Memorial to the Murdered Jews of Europe” in Berlin, you see how seamlessly these memorials are woven through the fabric of their respective city centres. Like here they are peaceful, but juxtaposed against the surrounding urban landscape there is an overwhelming sense of absence.

Walking back from Ireland Park along Queens Quay W towards the Rogers Centre baseball ground, I digest what I have just experienced. The story of the Irish abroad - and of the Irish in North America in particular - has not always been about misery and death. At 28, this is my first time visiting anywhere outside Europe. Coming to North America has not been a necessity; I am here to visit my brother who works as a financial consultant for Scotiabank. I am here because I have the good fortune to be able to get on a plane, eat some dodgy noodles, watch two PG-rated movies, then land on the other side unscathed from either disease or starvation.

I feel privileged to be here. Over the coming days I’ll bump into one well-known Irish writer on his way out of a movie theatre on King St W, have a pint with another in Wayne Gretsky’s on Blue Jays Way, meet with my best friend from school who is here with his girlfriend, and miss out on seeing Niagara Falls because of a bad case of sunburn. In the grand scheme of things, as the Canadians might say, I feel like the luckiest SOB alive.

James Conor Patterson is a poet and writer from Co Down. He lives in England and writes at jamesconorpatterson.wordpress.com and tweets @JCPattz

Coronavirus: Irishwoman in Cayman Islands on living under 24-hour lockdown

Extraordinary Emigrants: The Galway man was known as ‘quick tempered and tender-hearted’