We saved a church in Ottawa, and turned it into an Irish centre 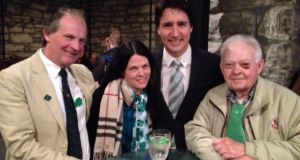 I was born in Portarlington, Co Laois, and my wife Brigid is from Mountbellew in Co Galway. Times were difficult in the 1980s and there were no jobs available, so we decided to seek opportunity abroad and went to Canada in 1989.

Brigid was offered a teaching position in Maniwaki in Quebec, on the Kitigan Zibi Indigenous Reserve, about two hours north of Ottawa. There were many familiar names of Irish who had come to those parts 100 years earlier: Kellys, O’Briens, Murphys and McConnells, and townlands like Brennan Hill, Gracefield, Farrelton and Knock.

For our first St Patrick’s Day in Canada, we attended a party at St Brigid’s Church in Lowertown, built by the Irish in 1890. It had an active parish of 450 mostly Irish families at the time, with clubs, choirs, and athletic teams. It was a central place for the Irish community in the early 20th century. Little did we know this space would play an important role in our own lives some 20 years later.

Canada’s current prime minister Justin Trudeau was a boy when myself and my wife came to Canada. He attended church with his dad, the then prime minister Pierre Elliot Trudeau, at St Brigid’s, and was confirmed there.

There were many Catholic churches in this area, but by the 21st century, very few parishioners remained. The archdiocese of Ottawa deconsecrated the building in 2007 and offered it for sale, and this is when a group of Irish people and I stepped in and bought it. It was almost Valentine’s Day. I arrived home with no flowers or chocolates, but said to my wife, “I have bought a church and put your name on it”.

Brigid was later selected as one of Canada’s Outstanding Principals while at St Patrick’s High School. It is a pity Ireland lost such talented people.

The church building, which is a couple of blocks from Parliament Hill, was renewed - with the help of substantial investment from members of the Irish community - and reopened as Saint Brigid’s Centre for the Arts, now home of the National Irish Canadian Cultural Centre. The space is used to host many arts, cultural and social events, including art exhibitions, concerts, fundraisers, conferences and private functions. I opened a bar in the basement, called Tobar Bhríde (Brigid’s Well).

This week, he met the new Taoiseach Leo Varadkar and President Michael D Higgins in Ireland, and seems to have made some lifelong friends. As he said to us at St Brigid’s, the Irish have given greatly to Canada. Ireland and its people will always have a friend in Canada, in Justin Trudeau, and in Saint Brigid’s Centre for the Arts.