Number of immigrants highest since 2008, but Irish still leaving in large numbers 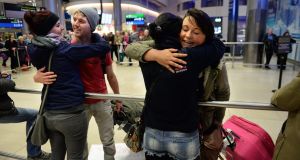 Ireland welcomed home 27,400 Irish emigrants who returned to live here from abroad in the 12 months to April 2017.

More Irish people are leaving Ireland than returning, despite a significant drop in the numbers emigrating.

Figures published by the Central Statistics Office on Thursday show that 30,800 Irish people moved abroad in the year to April 2017, down 17 per cent on the previous year.

This resulted in a net outflow of 3,400 Irish nationals, down from 8,800 the previous year.

Ireland’s popularity as a destination for non-Irish immigrants is on the up, with the numbers moving here increasing 6 per cent to 57,200.

Combined with the returning Irish, this brings the total number of immigrants to 84,600, the highest figure since 2008.

The total number of emigrants (both Irish and other nationalities) leaving Ireland was the lowest since 2008, at 64,800, a drop of 2 per cent on the previous year, and 23 per cent lower than the peak in 2012.

Have you emigrated or immigrated since April 2016? Share your story: a selection may be published

The UK remained the most popular destination for migrants of all nationalities leaving Ireland, with 12,100 moving across the Irish sea in the 12-month period, though this has fallen from 14,400 since last year, and 20,000 in 2011 when the numbers were at their peak.

Australia has also dropped in popularity as a destination, with just 5,300 people moving there from Ireland, down from a high of 17,400 in 2012.

More men continue to emigrate than women, with 34,200 males leaving the country compared to 30,600 females.

But the number of graduates leaving is rising, up 15 per cent since last year, which Fianna Fáil spokesperson on jobs Niall Collins said was an indication that “graduates are prioritising quality of life and cost of living when deciding where to work”.

“The annual action plan for jobs is failing to retain skilled Irish talent with decent jobs domestically. With rising living costs across all metrics and acute housing shortages, the country has severe competitiveness and policy challenges to overcome this deficit,” he said.

“Can our country really afford to be losing 500 graduates every week, many of whom are medical and nursing graduates who are desperately needed in the Irish health service?”

This year’s population and migration statistics include significantly revised figures for 2012 to 2016, based on data from the 2016 Census.