Irishman in Barcelona: ‘We’d be happy to live in a Republic of Catalonia’

Opinion: I want no part in a regime that hospitalises peaceful people who just want to vote 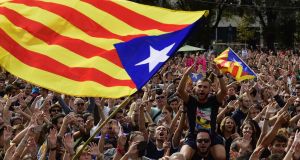 We spent from 5.30am on Sunday morning at the local library, or biblioteca, less than 100m from my home in Sant Cugat del Vallès, a town of 87,000 just over the hill from Barcelona. My partner and her father are from the French part of Catalonia, or Catalunya Nord, as it’s known. None of us could vote in the independence referendum, but after the authoritarian behaviour of the Spanish authorities in recent weeks, we wanted to help protect the voting centres.

As the sky slowly brightened outside, people chatted, read books, tried to sleep. Others had tea or coffee, or ate from the massive buffet of snacks that had appeared on a table. The Mossos d’Esquadra, the Catalan police, had visited the voting centres to check what was going on, then left. Everyone was prepared to block any seizure of voting materials, but I don’t think anyone was expecting the violence that the day would bring.

By 9am, the ballot box had appeared and the voting centre had been set up. We were all outside by now, protecting the door, looking in the window and applauding as the first vote was cast.

Then the stories started rolling in on social media. First it was about ballot boxes being seized. Videos from downtown Barcelona started coming through, where people were being slung aside by masked and armoured Policia Nacional riot squads. There seemed to be no escalation - no “please stand aside”. They simply arrived and battered people out of their way, old and young, as men in balaclavas swiped the ballot boxes. As voting centres were closed down, Catalan president Carles Puigdemont announced that voters could go to anywhere to vote, as a universal voting register was now in action.

Photographs of an elderly woman in Gracia with blood running down her face emerged. A voting official in one centre was dragged along the floor, her fingers broken by a riot cop before she was dragged down the stairs. Later she returned, her hand bandaged, as many other injured did. Others were hit by rubber bullets.

A friend in Mataró made a video showing riot police marching towards the voting centre like a Roman Legion, then beating people out of the way with batons. Other videos show Guardia Civil and Policia Nacional challenging Mossos officers, or flinging aside the ones who were stepping between the Spanish forces and the Catalan voters. Firemen were beaten for attempting to do the same thing. One fireman I spoke to said “we just want to protect people”. I saw a photograph this morning of riot police standing over a table where voting officials were playing dominoes - the ballot boxes had been hidden away. Another polling station sent the police away with boxes full of worthless unmarked ballots - the real ballot boxes reappeared when the cops had left town.

In Sant Cugat, people came and went from voting centres, to eat, and rest, and return with friends and family. Mossos officers were now standing guard. By the afternoon, around 250 voting centres had been attacked throughout Catalonia, and the number of injured were stretching into the hundreds. There was a nervousness that something could happen in Sant Cugat. Fortunately, it did not.

When voting ended at the library, ballots were poured onto a table. An official held up the empty box, to a cheer of “hem votat!” - “we voted!” Then the count began, watched not just by official observers, but by the community. They counted, recounted, verified, then the results were posted on the window: 680 votes cast, 90.37 per cent for Sí.

Outside, the Mossos officers were applauded for standing by the people, before the voting officials and ballot box were escorted by the crowd to Sant Cugat’s city hall, for further verification.

Through Catalonia, 2,262,424 votes were counted. 90 per cent were yes votes, just 7.8 per cent voted no. Much will be made of the “low” participation - 42 per cent. It must be realised that out of over 2,500 voting stations, 400 were closed down by police - and ballot boxes stolen. 770,000 ballots are missing. With those ballots, more than 3 million people, out of an electorate of 5.5 million, would have expressed whether they wanted independence or not.

There will be arguments until the cows come home about the validity of this referendum, but no argument justifies what the Spanish government did. Regardless of whether the referendum can really understood as legal, or illegal, the EU will need to deal with its aftermath.

Ireland is a small country that found its independence, after a long struggle. Catalonia wants to become Europe’s next republic. Ireland has a lot of experience that it can share with Catalonia, and I believe the Catalans are ready to listen.

Today, the streets of Sant Cugat are normal; it seems like any other Monday. There is a difference, however. People I’ve talked this morning are shaking their heads and saying “it’s over”. They’re not talking about their hopes for independence, they’re referring to the relationship with the political elite in Madrid. Catalonia may still be technically within Spain, but in many people’s minds, they are already living in a new Republic.

We would be happy to live in a Republic of Catalonia. The Catalans have ambitions to do things differently. The government has been passing progressive laws on energy poverty, banning fracking, wage equality and the likes, all of which have been swatted away by Spain’s compromised constitutional court.

Spanish online newsite El Espanol is reporting that the interior ministry has spent €31.7 million deploying police forces to stop the Catalan independence referendum. If Catalonia remains in Spain, it must be a Spain where I am not required to subsidise Mariano Rajoy’s Partido Popular, the Guardia Civil or the Policia Nacional, when it involves the beating up and hospitalising peaceful, ordinary people who committed no crime, other than a desire to vote. I want no part of that.