Want your kids to learn Irish abroad? These free resources will help 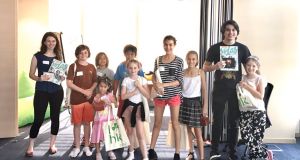 Learning the Irish language is not easy at the best of times, but that task can be much harder for children abroad whose Irish parents want them to grow up with their cúpla focail. Most countries have no options for formal schooling or lessons in the Irish language for children, leaving many parents out in the cold.

This is something that Conradh na Gaeilge, an organisation working to promote the Irish language in Ireland and abroad, is trying to change. They have just launched a new initiative, called Cultúr Club, which aims to provide children, parents, and workshop facilitators abroad with the skills and tools to teach and learn Irish.

The programme, which was funded with the assistance of the Department of Foreign Affairs and Trade and the Department of Culture, Heritage and the Gaeltacht, offers three activity books for children between the ages of 6-16, which can be downloaded for free from www.cnag.ie .

Cultúr Club also offers guidelines for teachers, parents and workshop facilitators on teaching the language, as well as a database of resources and teaching materials. They are currently rolling out a pilot scheme in parts of Australia, New Zealand and Britain to help train facilitators to teach the curriculum.

“Particularly when parents have their first child, they can suddenly realise that they’re away from the usual support networks of home, and they start to think, what does it mean for them to be Irish? The next question is, how can they pass that culture on to their kids? We wanted to help them with that,” she says.

Nic an Ailí says that there are “a huge number” of resources online to help people learn the Irish language, but most are focused on adult and self-taught learners.

“Even if the children will never actually end up going through the Irish education system, simple things like knowing who you are and where you come from are really important,” she says.

While it will take time to train facilitators of the programme in countries across the world, the activity books alone can already help children of Irish parents abroad learn the Irish language.

“I think in general, when you have young children growing up abroad, and particularly those families that are considering moving back to Ireland, they don’t want to lose that connection. I think it’s really important to encourage Irish kids abroad to learn what it is that makes them Irish,” adds Nic an Ailí.