View from Portugal: Commuter life in Dublin would be ‘just a horror show for us’

Wild Geese: Karl Smyth moved to Coimbra, Portugal nine years ago and finds that, even with its challenges, it offers a much better lifestyle choice for his family than Dublin 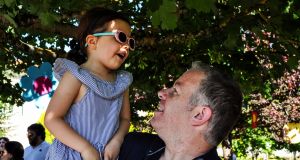 Karl Smyth and his daughter: the Dublin native runs his design studio from Coimbra.

“For the length of time I’ve been here, it’s probably been disproportionately slow. I wasn’t focused on building up a business or design clients here from day one.”

Karl Smyth has lived in Portugal with his young family for the last nine years. For the last three, he began his design studio which, ahead of Covid-19, was just beginning to flourish.

A Dublin native, Smyth believed he was destined for Disney or Warner Brothers when studying classical animation in Dún Laoghaire, but as his skills evolved so did his work opportunities. “I was getting work in illustration and then found my way in design; I was happy to do that, to adapt the knowledge from one thing and bring it into another.”

Smyth’s wife, Joana, is Portuguese. They met in Ireland where she was teaching Portuguese language and culture at UCD and Maynooth on a five-year contract. But that is not where Smyth gained his Portuguese – “Yeah, we tried that and it doesn’t work, her being my teacher” – before they moved to Joana’s homeland in 2011.

“Joana was pregnant, and I was freelancing but it was not a good time economically in Ireland so we figured it would make more sense to be in Portugal close to her family. She’d a lot more friends who had kids so there was a better support network, in terms of raising the family.

“Coimbra is a similar size to Galway and it’s a lot more affordable than Dublin would be. It’s easier to get around, there’s good schools, good connections – you’re almost midway between Lisbon and Porto so, geographically, it’s in a great spot too.”

Smyth’s clients up until now have been mainly based in western Europe and the US so his work does not determine his location. But, over nine years in Portugal, he and his family have often wondered if they are in the right place.

“I kind of have these moments when I think to myself, I could really build up the business if I was back home but then we’ll have a conversation with friends of a similar age, with kids of a similar age, and they work in Dublin but had moved to Wicklow town because it’s the closest to Dublin that they can afford to buy.

“They are up at 5.30 or 6am, to get the kids to playschool, child minder or wherever, so that they can commute to Dublin, and that’s just a horror show for us. Our kids are lucky. They can get up at 7.45am on a school morning and we’re down to school in five minutes. While they are in school, I think it’s a much better proposition for us to be here.”

Not to mention the other benefits to living in a city in Portugal instead of one in Ireland. “We always notice the difference when we go back home and pop into the Tesco near my parents’ house and realise that, what we’ve spent on 10 things, we’d spend on half of the big weekly shop in Portugal.

“Lisbon has the same issue as Dublin does,” Smyth continues, “in that any sort of tax break or incentive to bring multinationals into Portugal, the vast bulk of them are brought to Lisbon. What’s happening in Lisbon is like in Dublin. There’s a lack of housing, rents are going up, cost of living has gone up, but salaries aren’t necessarily going up.

“In certain industries, if you can get in the right level, there seems to be good opportunities but I think it’s very similar to Ireland in a way. There’s the capital (Lisbon) and then the second city (Porto) and then other places fighting for scraps and having to promote themselves a lot harder than the big cities would.”

When Smyth first arrived in Coimbra, he was predominantly a stay-at-home dad for the first few years, as Joana had picked up work at the university after maternity leave.

An introduction to a tech start-up, which produced travel guide apps, led to a full-time job directing and producing audio for them for a couple of years but the business started to go south and Smyth saw his opportunity to bail out and took it.

“I’d a chance conversation with some old clients in Dublin and they asked if I was still interested in working in design as they had some things that needed to be done. I bought myself a shiny new Mac, took out an Adobe Creative Suite subscription and got myself going from there. That was three years ago.

“The big problem for me is the lack of a business network here. A huge chunk of my career was obviously working in Ireland. I’d built up that network, whereas here I was immediately a dad for a couple of years. I wasn’t really getting out and networking. It’s kind of been a slow burn but now I’m beginning to find that I’m getting recommended more.”

This is probably why Karl Smyth Studio has won two branding awards in the last year . . . little acorns and all that.