Covid’s lesson: the improbable can very quickly become the possible 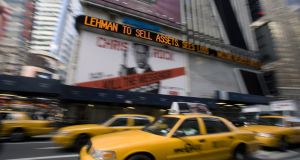 The Dow Jones ticker in Times Square, New York, displaying news about Lehman Brothers on September 10th, 2008. The bank failed because it prioritised short-term gain over the necessity to develop a future-proofed strategy. Photograph: Bloomberg News

In the weeks and months ahead we will undoubtedly hear corporate management teams blame Covid-19 and the subsequent lockdown for their company’s poor performance.

Yet in a century that has so far been pockmarked by conflict, recession, political turbulence and, increasingly, climate-related catastrophes, why were these business leaders unprepared for a global crisis of some kind? No matter how improbable.

Given that the lessons of the economic crash are still fresh in the minds of many, this is a particularly pertinent question.

Take the collapse of Lehman Brothers, for example. Not so long ago it was the fourth largest investment bank in the US and was considered to be one of Wall Street’s biggest dealers in fixed-interest trading.

However, as we all became painfully aware, it was heavily invested in securities linked to the US sub-prime mortgage market. When the environment was turning hostile in 2008 following the collapse of Bear Stearns, Lehman Brothers took a substantial hit.

Between June and August 2008, the bank made write-downs of $700 million as it adjusted the value of its investments in residential mortgages and commercial property. However, this figure soared to $7.8 billion, which resulted in Lehman reporting the largest net loss in its history.

The bank subsequently admitted that it still had $54 billion of exposure to hard-to-value mortgage-backed securities. In the end, with its peers and the government reluctant to extend a helping hand, Lehman filed for bankruptcy protection in September 2008.

Ultimately, Lehman Brothers failed because it prioritised short-term gain over the necessity to develop a future-proofed strategy that would cope with the collapse of the sub-prime mortgage market.

During the crisis that followed many organisations found themselves in a similar position, but others had the foresight to develop strategies that would see them stave off catastrophe.

Honda, for example, recognised that the collapse of Lehman Brothers and the subsequent financial crisis would limit the availability of credit. Rather than lay-off staff its response was to reduce activity.

First, Honda slowed production, reducing output from the 1.5 million vehicles originally forecasted to 1.3 million cars and light trucks. Adapting to new conditions, Honda then paused the development of concept cars, pulled out of Formula 1, and began to focus on a new generation of small city hybrid cars.

Honda didn’t just anticipate the credit crunch , and it recognised that terminating work contracts was permanent, difficult and costly to reverse. It therefore took a strategic decision to reduce working hours, which can be reversed relatively quickly.

Google took an altogether different approach to the economic crash. Rather than putting the business into a form of stasis, it went on the offensive.

Having bided its time, the online technology company decided to launch Google Docs amid the crisis, unleashing a full-frontal assault on Microsoft’s dominant position in the realm of word processing and spreadsheet applications.

Should the tax incentives and regulatory advantages offered in Ireland disappear, Phoenix could conceivably relocate elsewhere, swiftly and without considerable costs. Such long-term strategic planning allows corporations such as Phoenix Group to quit hostile environments in times of crisis, moving to friendly locations with the business relatively intact.

Although each of these organisations adopted different approaches to dealing with crisis, what differentiated them from rivals was ultimately their willingness to proactively consider all eventualities.

Reactionary policies tend to come with a significant financial cost. Take Coca-Cola following the sudden death of chief executive Roberto Goizueta in 1997 as an example. It the years that followed the fabled brand began falling behind archival PepsiCo as it entered a period of strategic drift.

It was only with the appointment of Northern Irishman Neville Isdell as CEO in 2004 that Coca-Cola began to reimagine itself as a total, non-alcoholic beverage company, seeking out opportunities to launch new products and establish new markets. Within a relatively short space of time Coca-Cola arrested its decline and began to recapture territory it had lost to PepsiCo and an assortment of smaller companies.

Notwithstanding the experiences of these high profile organisations, successful companies will once again falter, in part, because they assumed that they could develop long-term strategies without considering the possibility of highly improbable events.

However, if the 21st century has taught us anything it’s that implausible can very quickly become possible. Consequently, as we move beyond this current crisis, business leaders will need to seriously plan for unexpected events ranging from global pandemics and international terrorism, to technological disruption and bewildering changes to government policy.

They would be wise to take heed of Sir Arthur Conan Doyle’s Sherlock Holmes, who once observed, “when you have eliminated the impossible, whatever remains, however improbable, must be the truth”.

Thomas Lawton is professor of strategy and international business and director of the Global Competitiveness Institute at Cork University Business School.