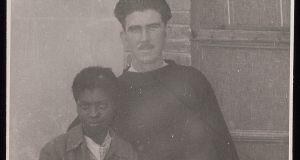 In late 1937 Langston Hughes, who was a poet, journalist and leading figure of the Harlem Renaissance, discovered a remarkable love story in a country at war. The Spanish Civil War (1936-1939), a conflict that pitted a democratically elected government against rebels backed by Fascist Italy and Nazi Germany, inspired the participation of idealistic journalists and volunteers from across the world.

While travelling through Villa Paz near the Spanish capital of Madrid, Hughes learned about a romance that symbolised the anti-racist politics animating much of his work. John O’Reilly, an Irish soldier from Thurles in Co Tipperary who was fighting for the defence of Spain’s leftist government, married Salaria Kea on October 2nd, 1937. Kea, an African American nurse, had come to Spain to offer her medical skills in the fight against fascism.

Hughes chased the story and learned details of the wedding, eventually publishing his account in the Baltimore newspaper The Afro-American in December 1937 under the title “NY Nurse Weds Irish Fighter in Spain’s War”. Drawing upon a letter from a colleague of Kea and O’Reilly, Hughes recreated the union of “these two internationals”. Guests were entertained by young Spaniards singing a socialist song and a three piece band, a local judge with a handlebar moustache presided over the ceremony and a blinded American soldier delivered a speech.

Hughes was not the only journalist searching for stories of anti-racist solidarity in Spain who became enchanted by the tale of this marriage. Nancy Cunard, a writer firmly committed to challenging racist ideas who had Irish ancestry on her mother’s side, met the happy couple in a Valencia café. She wrote up the encounter for the New York Amsterdam News, a leading Black American newspaper. O’Reilly, Cunard wrote, was a “tall, strapping man” who had been fighting with the International Brigades since the early months of the conflict. Kea mentioned to Cunard that she could not “go south” with her Irish husband, referencing discrimination the couple expected to face upon leaving Spain.

But who were John and Salaria before they became the Kea-O’Reillys and a symbol of anti-racist solidarity? O’Reilly was born on the March 29th, 1908 in Thurles where his parents lived at Sarsfield Avenue. Biographical details compiled by Barry McLoughlin note that O’Reilly claimed to have been an IRA member since 1922 and a member of the Thurles Irish Transport and General Workers’ Union (ITGWU) since 1934. From 1928 to 1932, O’Reilly served in the British Army, joining the force once more in 1935 before deserting and eventually finding his way to Spain.

O’Reilly served a long tour as a volunteer in the International Brigades, a transnational force of socialists and communists who fought for the defence of the Spanish Republic. O’Reilly appears to have served from the early months of the Spanish Civil War until late 1938, when the International Brigades were recalled. James Yates, a Black American volunteer in Spain, remembered O’Reilly in his memoir as one of the soldiers who had fought to defend Madrid. In May 1937, O’Reilly started working as an ambulance driver and attendant in the American hospital at Villa Paz, where he would meet his future wife.

Salaria Kea, born in Milledgeville, Georgia in 1913, was a graduate of the Harlem Hospital in New York. Before volunteering to travel to Spain, she had participated in solidarity actions in support of those resisting Mussolini’s invasion of Ethiopia. Kea was also Catholic, something that may have proved a point of commonality with her Irish soldier husband.

Kea described the early days of their relationship in a memoir titled Passing Through. O’Reilly, she remembered, spent much of his time at the field hospital writing poetry alone. Eventually, Kea learned that the Irish loner’s poems were all about her. After getting to know each other over several weeks through conversations about “North America, Ireland, and all groups and races who were victims of fascism and other injustices,” O’Reilly proposed to her. Although initially hesitant, Kea eventually accepted the proposal.

O’Reilly returned to Britain in October 1938 with the help of the Irish Legation in Paris. In a letter to his father, O’Reilly explained that he was not coming home, having been discouraged from returning to Ireland due to fears of discrimination. Meanwhile, back in the US, Kea began a protracted process of arranging for American citizenship for her husband.

Once citizenship was granted to O’Reilly, the couple spent the rest of their lives together in the US, at first in New York City and later in Akron, Ohio. In 1975, a reporter from the Cleveland Magazine went in search of the pair. The resulting profile, reproduced on the Ireland and the Spanish Civil War website, describes a “modest, unassuming couple” living out their later years in an ordinary apartment, with only a Spanish wall-hanging and a photograph from the war marking the extraordinary history that formed their relationship.

This Extraordinary Emigrants article was written by Dr Maurice Casey, the Department of Foreign Affairs and Trade historian-in-residence at EPIC The Irish Emigration Museumin Dublin’s Docklands, an interactive museum that tells the story of how the Irish shaped and influenced the world.