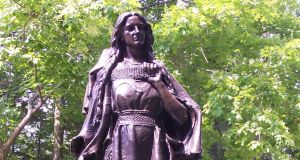 ‘The White Woman of the Genesee’: statue to Irishwoman Mary Jemison.

When we think of migrants we think of those who have left their homelands for a life elsewhere, people who simultaneously belong both here and there. However, not everyone fits neatly within the boundaries of that simple definition. One such person was Mary Jemison.

Jemison was a Scots-Irish migrant born aboard the William and Mary, a ship bound for Philadelphia from the shores of Co Antrim. The newborn and her family arrived in British colonial North America in 1743 and eventually settled on the western boundary of Pennsylvania where land was cheaper. She spent her childhood in the backcountry farming with her family and they became moderately prosperous.

Prior to their arrival, the area had not been cultivated in a European fashion and packs of wolves and lone panthers still roamed the countryside. The wolves and panthers would occasionally kill some of their newly introduced livestock.

Their relations with the neighbouring Native Americans remained relatively peaceful until the outbreak of the Seven Year’s War between the French and the British, known locally as the French and Indian Wars, in 1754.

The Jemisons found their homestead on the front lines. In the early spring of 1755 the family were attacked and captured by a band of French and Shawnee raiders. Her family were later killed, and only she and another young boy captured from a nearby farm were spared. They were given to two women from the Seneca tribe in payment for the death of their brother at the hands of the Shawnee the previous year.

Jemison was given the Seneca name of “Dehhewämis”, which roughly translates as “pretty girl or pleasant good thing”. The two sisters, who had adopted her, taught her their language. It wasn't long until she spoke the language fluently. She describes her time with the sisters as comfortable and she helped them to harvest their annual crop of corn, beans and squashes.

Soon after she was married to Sheninjee, a Delaware warrior who had come to live with the Seneca. They had two children within three years, though their daughter died only two days after she was born. They named their son Tommy after her father. Tragedy was to return again once more when her husband died after taking ill while hunting.

Jemison had to travel more than 966km (600 miles) on foot with her nine month old son with no place to take shelter from the elements. She eventually arrived at the Seneca town of Genishau where she remained for some time with her extended family. As the Seven Year’s War drew to a close, she chose to remarry and remained with her new husband, Hiokatoo, until his death in 1811. They had six children together, and once more enjoyed a period of general peace and prosperity.

Jemison states that: “No people can live more happy than the Indians did in times of peace” saying she found her neighbours to be modest and chaste who revelled in the simple pleasures of daily life until the introduction of strong liquors, principally rum. She viewed spirits as a blight upon native American society that was the root cause of so much social harm.

When the American Revolutionary War began in 1775, the Seneca and three of the other five tribes of the Iroquois Confederacy were called to aid their British allies and offered extensive rewards if they did so. Jemison’s husband and other warriors subsequently went to war, but the rest of the tribe was left largely untouched and continued with their way of life until 1779.

Then living at Little Beard’s town in western New York, Jemison and all of the others that resided there were forced to flee when Irish-American Maj Gen John Sullivan launched a scorched earth policy against the pro-British Iroquois tribes, burning more than 40 villages and capturing many prisoners under direct orders from Lieut Gen George Washington. Little Beard’s town was among those destroyed.

After the war ended, the Seneca were deprived of their lands and American settlers continued to encroach on the territory they retained. In 1797 an unequal treaty was concluded between the Seneca nation and the United Sates government that saw the tribe surrender nearly 1.5 million hectares (3.5 million acres) of land to the US in exchange for the creation of a number of reservations and the preservation of their traditional hunting and fishing rights.

Jemison took part in the negotiations and was granted 7,254 hectares (17,927 acres) of land along the Genesee River for her assistance where she would remain until forced to cede this land in the early 1820s. Her final home was among the Seneca living on at Buffalo Creek Reservation where she died in 1833 at the age of 90.

Throughout her later life Jemison was considered a curiosity and was referred to as “the White Woman of the Genesee”. Her repeated rejection of the colonial way of life in favour of that of the Seneca confused many of her contemporaries who couldn’t understand why she refused to return to “civilisation”.

The author and protestant minister James Seaver visited Jemison in 1823 and wrote a biography of her life based on their conversations. A Narrative of the life of Mrs Mary Jemison became a bestseller and proved immensely popular with at least 28 editions printed to date.

A statue was erected of her in 1921 in Adams County, Pennsylvania and the story of this migrant Irish woman, born neither here nor there, who belonged to both European and Native American society remains a compelling one.

This Extraordinary Emigrants article was written by Nathan Mannion, senior curator of EPIC The Irish Emigration Museum in Dublin’s Docklands, an interactive museum that tells the story of how the Irish shaped and influenced the world.The museum is reopening on June 29th.