Kerryman in Slovakia: No tourists around is both a blessing and a curse

'During lockdown I learned how to ride a bike, took up painting and learned to play an instrument’ 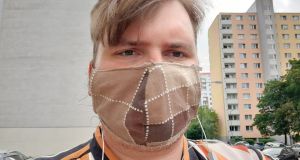 Oscar Brophy is from Ballyheigue in Co Kerry. He has lived in Bratislava, Slovakia since 2016 and works as an English teacher and stand-up comedian

Oscar Brophy is from Ballyheigue, Co Kerry. He has lived in Bratislava, Slovakia since 2016. He lives there with his partner Hanka and their baby Miško, and works as an English teacher and stand-up comedian.

Life is slowly returning to normal here in Bratislava after the coronavirus lockdown. Bars and terraces have reopened (only until 10pm) as are shopping centres, theatres and cinemas, but all with restrictions. Face masks are mostly no longer mandatory in public. Slovakia, a landlocked country with a population of about 5.4 million, was one of the fastest to lock down in Europe. It has 1,531 confirmed cases of Covid-19 and 28 deaths. The compulsory two-week quarantine in state facilities and e-quarantine for Slovaks arriving from abroad was lifted yesterday. I’m calling the “quick in, quick out” lockdown strategy.

By the end of February, we were watching with growing concern what was happening in northern Italy and cases slowly spread into southern Austria and over to Vienna. On March 6th the first case in Slovakia was confirmed. Just three days later, schools in Bratislava were closed. Just a few days sfter that, with 21 confirmed cases, an emergency was declared and the borders were effectively shut.

For about three weeks my partner Hanka, our baby Miško and I sat in our two-room apartment for 23 hours a day. I mainly watched the Sopranos and played video games. I work as a teacher and after a few weeks, I began teaching from home via Zoom –  I will sorely miss the mute button when we’re back in class.

I had freaked out a little bit a few weeks before that and had bought a week’s supply of canned tuna and red kidney beans, as well as a 10kg bag of rice I got at an Asian cash and carry. Thankfully the food supply was uninterrupted and we didn’t have to resort eating to tuna and bean stir-fries.

I wasn't ever too afraid of getting the virus myself, but I still became a religious hand washer and mask wearer. We live in Petržalka, what is purported to the most densely populated district in central Europe. A major outbreak here would have been a disaster.

While Slovakia and its neighbours have fared quite well compared to places like Ireland, it is a cold comfort. My heart is heavy with the burden this pandemic on my friends and family at home. And while the virus itself has not touched us all equally, I worry the coming economic tribulations certainly will.

There was never a ban on gathering in public, so by the end of March I was tentatively meeting up with some friends in a park once a week for about two hours. We engaged in can drinking, but deigned to keep our shirts on. This eventually gave way to barbecues in April. At this stage several bars were open selling pints in plastic glasses from windows. In May, bars opened indoors. It’s not perfect, but it’s something.

I have taken it upon myself to have as much craic as possible to make up for the massive craic deficit ongoing at home.

The streets of Bratislava look somewhat normal now except for no tourists rambling around the old town. This is a blessing and a curse. I know several business owners in the city centre who rely on foot traffic to stay afloat and many people working in service positions who aren’t getting the tips they need to survive. The silver lining is that because the borders are closed there are no stag groups all dressed as superheroes (or babies, or police, or penises) vomiting outside the strip clubs.

Face masks are still everywhere you look. The jury is still out on whether they played any role in Slovakia’s success, but at least they offered some kind of mental protection. As someone put it to me, the face masks are mainly about showing solidarity with one another that we are all in this together.

Given that I had my main creative outlet, stand up comedy, taken away from me, I’ve been pursing other avenues of creation. About three weeks ago at the age of 26 I learned how to ride a bike. I’ve also taken up painting, started dabbling once again in zine making (mini-books) and I’ve taken up the Fujara or Shepard’s flute, which is something like a Slovak digeridoo.

I'm hoping to start performing comedy again soon. Given how lucky we are here, I have taken it upon myself to have as much craic as possible (while also being a dad) to make up for the massive craic deficit ongoing at home.

If you would like to share your experience of  your life has been affected by Covid-19 email abroad@irishtimes.com