The Irish hands that helped make Britain what it is today 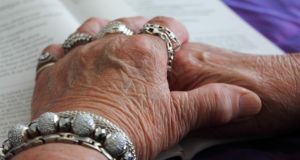 "My friends call me Sparkling Rosie, because I love wearing sparkling jewellery": The Hands of Time calendar project has gathered photographs and interviews telling the stories of the women who gather for a weekly lunch at The Hibernian Society in Reading.

I was 18 when my family emigrated from Westmeath to Berkshire in 1960. I’d imagined England would be very drab and industrial, but I couldn’t believe the beauty of the place.

I got my first job in Underwoods’ Typewriters in Reading. After tax I took home £3.04 a week. I then worked as a copy typist for the BBC, and in 1961, got a job in Westminster Bank. I met my husband at a dance in Reading and we married in 1965 and had four children. I returned to work part-time at the bank in 1978, where I remained for 30 years.

Struck by the diversity of music on the radio, in 1995, I contacted our “local” BBC Radio Berkshire, and suggested a radio programme for the Irish community. Irish Eye became the most popular weekend show on local radio. I also contributed, reading stories, poems and listeners’ requests.

A few of us, including my brother and nephew, started to talk about the elderly Irish in our community, a lot of whom live in isolation and loneliness. We established The Hibernian Society in 1995, with the aim of improving their quality of life.

Our first Lunch Club at the local church hall had 22 attendees. It consisted of a hearty meal, a raffle and bingo. To celebrate, we had a glass of sherry for everyone, a tradition that continues today thanks to a very generous but anonymous local Irish gentleman.

We moved to Reading Irish Centre in 2007, and now, The Hibernian Society Lunch Club caters for 80 elderly people every week. We provide hot meals, seated yoga, bingo, films and quizzes, and services such as chiropody and hairdressing. A lot of Lunch Club attendees are Irish, but we have people from across the UK and further afield.

We try to make it special. Someone asked once, why wouldn’t I use paper plates? I replied that I wouldn’t give my own mother dinner on a paper plate. The way I see it, these people have worked hard all their lives; why wouldn’t they have proper plates? It’s not really about food or drink, it’s about people coming together and meeting their friends. Why should they be forgotten? They’ve worked hard, and they deserve the very best.

Once, Daniel O’Donnell was playing in the Albert Hall in London. Judging by his show dates, I estimated he might be free on the Wednesday, so I wrote to him and invited him to our Lunch Club. He visited, and was incredibly generous with his time. Val Doonican and Dominic Kirwan have also visited.

The Hibernian Society gets some money from the Irish Department of Foreign Affairs’ Emigrant Support Programme, and from Reading Borough Council. But we have to fundraise to continue to offer our service and combat social isolation among the elderly, a group of people who have given so much, and who have paved the way for others.

I had the idea of a fundraising calendar featuring the hands of some of our members. As I see it, hands tell the story of life - of laughter, of longing and of love.

Our next task was to find a photographer. I broadcast a weekly radio show from Reading College studio called A Little Bit of Blarney (check out the programme Nansheen on Soundcloud.) Jonny Cunningham at the college was very interested in the project and we arranged “sittings” for our “models” with photographers from the work preparation course, which provides support for students with learning difficulties.

We interviewed the women to write a short biography, and with the photos, created a beautifully-produced keepsake The Hands of Time calendar for 2018. Each month introduces a new “model”, and tells us a little about her life - some stories more revealing than others, but none unimportant. Those hands worked hard in factories across Britain, rearing and educating families, making Britain what it is today.

Maura from the Glenties came to Reading when she was 20. Norah, from Kerry, is now 89, and attends the Lunch Club three times a week. Betty was evacuated to Reading from London during the war, and subsequently became Mayor of Reading. Sheila from Killorglin emigrated to Reading in 1947. Eileen from Liverpool won the Victor Ludorum Medal for Sports in 1946, and lives by the motto “never say you can’t because you can”. Lil from Ballymore Eustace worked in Kardomah restaurant in London where she met a lot of celebrities.

I want to make a difference to other people’s lives. If I don’t succeed, I don’t succeed. But life is so short, isn’t it? I recently celebrated my 75th birthday. I think it’s up to all of us to do what we can - you’ve got to have the courage of your convictions. If we’re given the gift of communication, whatever it is, we should use it positively. And I think I’ve got that gift, because I can talk for Ireland and every inch of Great Britain too.

The Hands of Time calendar 2018 can be ordered from the Hibernian Society Reading website thehiberniansociety.co.uk