Sugar and spice and all things nice: Advent baking in Germany 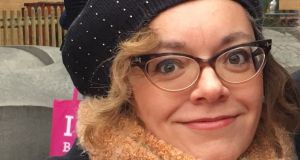 ‘Can it be, that in this season of giving, a humble biscuit can become a gift of such value?’

Baking holds a special place in a German Christmas, and this is no more clearly seen than during the three weeks of Advent.

Advent is traditionally a time for prayer and preparation. In Ireland nowadays, Advent tends to get overlooked in the frantic race to Christmas Day. Not so in Germany, as I discovered when I first moved with my husband and two children to Berlin.

Germany is largely secular society, but the first weekend of Advent is greeted with unbounded joy and anticipation. Christmas markets are opened up, mulled wine is heated and carols are sung. Advent wreaths decorated with evergreens, candles, ribbons and nuts proudly adorn the dining-table, and huge swags of fir-branches are draped over every available interior surface. One of my favourite German traditions to mark this time is the baking and eating of special Advent biscuits, called Adventsplätzchen.

Adventsplätzchen are strictly eaten only during the Advent season. There are countless varieties, from butter cookies that children can decorate with icing and sprinkles, to spicy Spekulatius biscuits, or crescent-moon shaped Vanillekipferl made from almond shortbread.

Adventsplätzchen often contain a heavy emphasis on the use of honey, spices and nuts, which can clearly be seen in Lebkuchen, the classic German gingerbread. There are almost as many varieties of Lebkuchen as there are of Adventsplätzchen, but our family favourite are the delicious Engelaugen - which translates as “angel eyes”. Small roundels of almond shortbread are adorned in the centre with tiny jewels of red jam - the “eye” of the angel - and sprinkled with a puff of icing sugar.

What all Advent biscuits have in common is they are labours of love. Time-consuming and fiddly to bake, I nevertheless know of no Berlin family which would not bake at least one or two batches, despite the proliferation of mass-produced variations now available on supermarket shelves. They are then brought out for Sunday Kaffee und Kuchen, to be shared by family, friends and neighbours at each weekend throughout the Advent period.

I had experienced this myself on previous visits to my husband’s family, so for our first Christmas as official “Berliners”, I wholeheartedly embraced this German tradition. Even though we were barely two weeks into our new apartment and surrounded by packing boxes, I enthusiastically spent many days mixing and rolling, shaping and baking an impressive array of Advent biscuits, helped by two pairs of eager little hands.

But I made two mistakes.

No sooner were the biscuits cool, then I packed them away in air-tight tins, safe-guarding them for the Big Day, like the good Irish mammy that I was. And then, being used to American-sized cookies, I made “monster-Adventsplätzchen”. When I triumphantly brought out and displayed my platters of biscuits on Christmas Eve, they were met by many ooohs and aaahs. But though my children did their level best, by the early weeks of January I was still left with boxes of biscuits.

I had completely misunderstood the whole point of Adventsplätzchen. Over the Christmas week and into the New Year, there are so many puddings, chocolates, cakes and other delicacies, there is very little space (on tables or in stomachs) for biscuits. That is also the reason why they are made so small - tiny in fact. A guest at the coffee-table does not want to be full after just one, but wants to sample the choice on offer.

These Advent biscuits are for sharing. In the craft of their baking, they are expressions of care and affection towards one’s family and friends. In their once-a-year novelty, they encapsulate the magic and distinction of the Christmas feast. And in their colourful and attractive display, they are an edible expression of the plenitude and generosity of the festive time. They bring pleasure and anticipation to the Advent period of waiting and expectation. Can it be, that in this season of giving, a humble biscuit can become a gift of such value? I think so, which is why I’m now reaching for my own apron, to try out yet another new recipe for gingerbread....

Macushla Baudis is a historian living in Berlin, currently writing a book on German food culture.

This recipe calls for three egg yolks. The left-over egg whites are typically used in other types of Adventsplätzchen such as Coconut Macaroons. I usually freeze the egg whites, to be later used for a Christmas Day Pavlova.

The biscuit dough must be twice cooled in the fridge before baking. It may be tempting to skip these steps to speed up the process (believe me, I have tried!) but they are essential to achieve the crisp, crumbly texture of the biscuit, as well as ensuring that it retains its shape while baking in the oven.

1. Using a fork, lightly beat the egg yolks with the vanilla essence. Set aside.

2. Combine the flour, baking powder, sugar and salt in a large mixing bowl.

3. Cut the butter into chunks and, using your fingertips, combine with the dry ingredients until the mixture resembles fine breadcrumbs.

4. Add the beaten egg, using a fork to loosely mix it in, before taking over with your hands to knead in the bowl. After a minute or so, you should have a firm, evenly coloured dough.

5. Divide the ball of dough in half. In turn, divide each half into 3 equal sections, accordingly leaving you with 6 equal-sized balls of dough. Roll into ball to form a long cylinder shape roughly 2cms in diameter - the size of a 5 cent piece. Wrap each of the 6 cylinders individually in cling film, and leave to cool in the fridge for half an hour.

6. After half an hour, remove the chilled cylinders of dough. Cut each cylinder into 12 slices, and roll each slice into a small ball. Lay each ball on a large plate and using the handle-end of a wooden-spoon, make a small round indent halfway into the centre of each ball, forming a ‘well’. Place the dough-balls back in the fridge for at least 1 hour.

8. Fill the well in each dough-ball with a tiny dollop of jam (I find the end of a teaspoon works best for this task). Place the first batch of biscuits on a lined baking tray, leaving sufficient space between each to allow for some swelling. Return the other biscuits to stay cool in the fridge, until ready for baking.

9. Bake for 10-12 minutes, until a light golden brown. Cool on a wire rack, and sprinkle with icing sugar.

When I move to my new home, I'll miss Ma throwing her beady eye over everything
2