How Irish is Meghan Markle? Does it really matter?

Spectators waited for over an hour to get a glimpse of Meghan Markle and Prince Harry as they arrived at Government Buildings to meet Taoiseach Leo Varadkar. 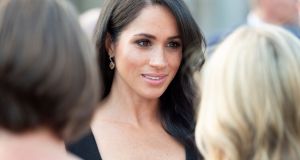 It will probably not surprise many people that genealogists have been at work in finding Irish ancestral connections for Meghan Markle to coincide with her marriage to Harry Windsor and, most recently, their visit to Dublin this week.

On Wednesday, the Duke and Duchess of Sussex are due to visit Epic, the Irish Emigration Museum in the Dublin Docklands, where other well-known visitors, most recently Canadian prime minister Justin Trudeau, have received a copy of their family tree tracing their Irish ancestors at the neighbouring Irish Family History Centre.

Although Epic says there is no plan to present the duchess with such research on Wednesday, other genealogists have claimed to trace her roots back to a woman born in Ballinasloe in Co Galway in the 1820s, who later emigrated with her daughters to Canada.

Like many other visiting dignitaries, especially from the United States, from JF Kennedy to Barack Obama, coming to Ireland seems to be an occasion to find Irish ancestry for them, locate a specific origin place if possible, and make much of this connection. It is as if this somehow intensifies a national welcome.

Meghan Markle is in a long line here. A particular lineage not just of those with Irish ancestors in the “old country”, but of those found to have them when they become famous and come to visit, and get the gift of ancestral inclusion. This latest instance of “Irish roots found for the famous” phenomenon might be a moment to have a think about this, and to ask some questions.

The questions that matter are much less about the depth and degree, or even accuracy, of Meghan Markle’s genealogical links to someone from Ireland in the past. It would not be fair, and beside the point really, for anyone to go into debunking mode, or to point to the commercial value of evoking roots, and spoil what should be a pleasant and ideally informative visit for them, and perhaps even a constructive one in a time of tense Irish-British relations.

And the question cannot be whether she, or anyone else for that matter, has enough ancestry to be considered to be Irish, since that is part of the problem of linking a welcome to a place with an ancestral connection. 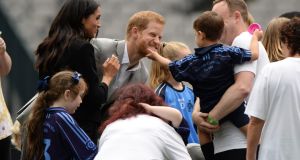 Instead, how about posing the question of who needs Irish roots? Meghan Markle shouldn’t need any to feel welcome in Ireland, nor is she likely to be looking for Irish citizenship and the freedom of movement in the EU that it affords. And she obviously does not need them to claim permanent rights to remain in Ireland as a refugee. Different people need Irish roots in different ways.

People may gain Irish citizenship without Irish ancestry or family connection, but only in exceptional circumstances. Celebrating a celebrity’s Irish ancestry when they visit can be thought of as a generous gesture made possible by the scale of Irish emigration in the past. But does that imply less of a welcome for a visitor without any family connection?

Probably not if you are famous and passing through, but yes if you are seeking citizenship as an asylum seeker or a “non-national”. Refugees living the trauma of waiting years for asylum status in Direct Provision Centres are far removed from the world of generous welcomes to the famous with newly found Irish connections, let alone ordinary integration.

On the face of it, the Epic is just a state of the art digital tourist attraction celebrating a global diaspora with Irish ancestry, but it also offers particular messages about belonging.

One reason for this is its proximity to the Irish Family History Centre in the same building. Visitors to Epic are made aware of this by a sign that says: “How Irish are you? Trace your Irish Genealogy Today! Visit us at the end of your Epic visit”.

The museum does make a considerable effort to tell multiple stories of Irish emigration, as well as convey its the scale and significance, including the overlooked experiences of women and Protestant emigrants, for example. It also addresses the economic problems and social conservatism of the Irish state as reasons for emigrating, as well as the more familiar accounts of colonial oppression, negligence and the Famine.

But there is a sense that even these more complex emigrant stories are the heritage of only those with Irish ancestry within and outside Ireland. When I visited in March this year, it was possible to buy a t-shirt in the gift shop with the words: “Pure Irish Ancestry”. What does it mean if you don’t have much or any? That you can’t appreciate Irish culture or history, or that you can never really belong?

Epic is of course a museum of Irish emigration. But it wouldn’t take much to properly acknowledge that Ireland is also a country of immigration. Early in the museum, Ireland is described as “An Open Island” whose “geographical and cultural landscapes have been shaped” for thousands of years “by waves of people arriving and departing”. But this sense of Ireland being a destination gets lost in the exhibits which follow.

Early on there is also is an impressive dynamic map of the histories and geographies of migration from Ireland. What about another one later of the places that people have come from in migrating to Ireland?

It wouldn’t take much either to broaden the focus to other forms of mobility and strands of the diaspora, and so include Irish Travellers who not only have long histories of nomadism in Ireland, but also share family histories of emigrating to and travelling between Ireland and the UK, with “settled” Irish migrants in Britain, and emigrated along with so many other Irish people in the 19th century, and live as Irish Travellers in the US.

It would be good if the questions asked about ancestry were less about the details of the Irish connections of celebrity visitors, and more about ancestry as a measure of belonging. But perhaps this visit of the duchess and duke, with its familiar welcome back to an ancestral homeland, for one of them at least, might turn out to be an opportunity to think carefully about that question of who needs Irish roots, and why.

Catherine Nash is Professor of Human Geography at Queen Mary University of London, and author of Of Irish Descent: Origin Stories, Genealogy, and the Politics of Belonging (2008) and Genetic Geographies: The Trouble with Ancestry (2015).