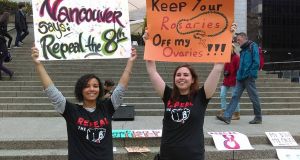 Syllona Kanu and Kirstin Campbell of VancouverAbortion Rights Campaign, which will stage a demonstration in solidarity with March for Choice at Vancouver Art Gallery on Saturday

Saturday shoppers, tourists and well-heeled residents of Belgravia in west London will encounter some unusual street art on Saturday, September 30th, when members of the London-Irish Abortion Rights Campaign will make 205,704 chalk markings on the pavement outside the Irish Embassy at 17 Grosvenor Place.

The organisation says “the markings will represent the 205,704 Irish and Northern Irish women who have travelled to Great Britain for an abortion since the 8th Amendment in 1983”.

The gathering, at 2pm, is one of a number of events happening worldwide in solidarity with the Abortion Rights Campaign’s 6th Annual March for Choice in Dublin. These are being coordinated by Repeal Global as part of the Global March for Choice.

Clare Lanigan, spokesperson for the Abortion Rights Campaign, says “Abortions Rights Campaign has 20 regional/affiliate groups all over Ireland, an affiliate group in London and new groups starting all the time in Ireland and abroad. There are 21 actions taking place as part of the Global March for Choice.

“We are seeing more and more solidarity events with the March for Choice every year. Most of these are started by groups of Irish people living abroad, but we have also seen solidarity demos and support from other pro-choice activists in countries all over the world.”

“As part of the Irish community abroad, this Saturday is about standing with our sisters in Dublin, fighting for the rights we enjoy here in London. It’s about creating a better, more progressive and open-minded Ireland to return to should we choose to do so.”

Orlaith Finnegan, a freelance PR consultant based in Paris, is organising a protest rally outside the Irish embassy in the city. “I was spurred into setting up a solidarity event in Paris to coincide with last year’s ARC March for Choice when I saw other global events popping up in London, Berlin and Brussels. As soon as I tweeted my intention to organise a solidarity event in Paris I had several people messaging me offering support.

“We’ve decided to formalise our Paris group as an affiliate of the Abortion Rights Campaign because there’s lots of fundraising and advocacy work we could do beyond the solidarity rally, for example fundraising for the Abortion Support Network, the Abortion Rights Campaign and linking up with feminist groups and others in Paris who could support and amplify our call for the repeal of the 8th amendment and the introduction of free, safe and legal abortion across Ireland.”

In Utrecht, the Netherlands, Fiona Kirk and her fellow members of U-Repeal, a group of students and recent graduates living and working in the city, will also be demonstrating on Saturday.

“One of our members, Shannon O’Reilly, organised a gathering on a sunny day in a popular park on the same day as last year’s March for Choice. The event was well attended and we realised that there was a significant number of people living in the Netherlands passionate about the repeal movement.

“This Saturday we are holding an event in solidarity with the March for Choice. We have amassed a significant following, with about 100 people expected to attend. Our event will begin as the march in Dublin commences, so we will have a live stream of that. Our keynote speaker is Aideen O’Shaughnessy, one of our members, who is in the process of completing her thesis on the issue of abortion rights in Ireland.”

In Vancouver, Canada, Syllona Kanu, a 22-year-old from Longford who moved to the city in early 2015 is organising a solidarity event along with three friends. “It will take place at the Vancouver Art Gallery in the city centre at 11am. We are hoping to have about 100 people at the event. We have recently become affiliated with the Abortion Rights Campaign and are now officially the Vancouver Abortion Rights Campaign.

“Our goal is to raise enough awareness around the world to make this a global women’s rights issue. We have tried to be as creative as possible with this in order to engage Canadian locals and also communicate to people at home that pro-choice laws do work. One tool we used for this was creating a voxpop style video where we recorded the reactions of locals and their response to hearing facts about the current laws in Ireland.”

Emer O’Toole, Assistant Professor of Irish Performance Studies at Concordia University and author of Girls will be Girls, is organising the Montreal Repeal Global event, a picnic in Jeanne-Mance Park. “Dr Susan Cahill, of Concordia University, organised the Montreal Repeal event last year. I’m organising this year’s event with my friend Eoin Ó Catháin, as Susan is on sabbatical. We’re doing it in solidarity with all those marching in Dublin, and to provide an event for all us immigrants and allies who want to show that even though we’re far away, we care deeply about repealing the 8th amendment.”

Dervla O’Malley of Berlin Ireland Prochoice Solidarity, says: “We will hold our rally this Saturday at 1pm in Tempelhofer Feld, Berlin’s former airport now turned park. It’s somewhat symbolic given the women who are forced to leave Ireland each day for an abortion, usually from an airport.

“We have growing support from locals who are always surprised and shocked to hear that Ireland has an abortion ban (if they weren’t already aware of it).”

Shauna Stanley moved from Ireland to Australia in January and is working at an Aboriginal rights law centre. “Irish Pro-Choice in Oz was set up last year, but recently became Melbourne-Irish ARC, as we decided to affiliate with the Abortion Rights Campaign in Ireland.

“This year we’ve been providing support and encouraging people in other Australian cities to set up their own March for Choice events, with the hope of seeing other ARC groups pop up around Australia. Our group was founded by four Irish women – Ann Twomey, Astrid Ryan, Aoife Cooke and Orlagh Hurley – in response to Repeal Global’s callout for a Global March for Choice.

“We held our first open meeting in July to reach out to more people who would be keen on helping with organising our March for Choice this year. Our membership is a mix of Irish in Melbourne and Australian feminist activists.”

The 6th Annual March for Choice takes place on Saturday, September 30th, assembling at the Garden of Remembrance on Parnell Square, Dublin 1, from 1.30pm, before marching to Dáil Éireann at 2pm. The theme of the march this year is Time to Act. See facebook.com/events/257070751427136

Details of Global March for Choice meetings and demonstrations taking place around the world on Saturday can be found here: