Life in Venezuela, where a monthly wage buys just 15 beers

Calm has returned after months of protests, but the struggle of everyday life remains 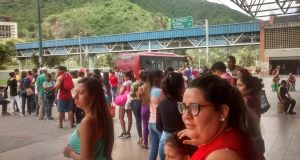 It was with a mixture of trepidation and excitement that I made my return journey to Venezuela, my fourth time in six years to visit this country under a host of internal and external pressures.

For sure, things were far from steady the last time I visited in December 2015.

News reports focused on hyperinflation, food and medicine shortages, high levels of crime, and a country on the verge of dictatorship.

That visit two-and-half years ago did, however, coincide with a brief moment of hope that a way out of the crises the country was then suffering was on the horizon.

The opposition parties to the ruling self-styled ‘Socialism for the 21st Century’ government won the congress elections.

I was staying with a family in a largely Chavista, lower working-class neighbourhood, that is to say supporters of the socialist revolution started by the late president Hugo Chávez Frías.

Those I was with were anything but Chavistas. They greeted the congress results with cheers and hugs, there were even a few tears. Change had to be forthcoming now, perhaps even a cross-party, national government.

The optimism of that December night soon died.

In the intervening years the Maduro administration has basically relegated congress to nothing more than a talking shop. A new constitutional assembly, filled with pro-government, pro-socialist revolution members has usurped congress.

Maduro himself brought forward the date of presidential elections, winning another term this year in a contest largely ignored and seen as nothing more than a fraud by opposition politicians and supporters alike.

After months of bloody street protests against a government seen as incapable or even unwilling to address Venezuela’s many ills, things have returned to a relative calm.

All the economical, political and societal problems remain, though. Indeed they’ve worsened by all accounts. It was to this backdrop that I nervously returned, to witness things for myself. My fears were balanced out by messages from Yessi, my good friend in Caracas, that the place wasn’t in a total, lawness mess. News reports from the relative comfort of neighbouring Colombia as well as first-hand accounts from Venezuelans who have emigrated there would make you think that is the case.

The hyperinflation hasn’t gone away. Since my last visit, a few more zeros have been added to the bolivar, the unfathomable local currency that has at least three different exchange rates.

A notes’ shortage has resulted in cash transactions for even the cheapest of purchases becoming rare. Convoluted card transactions are the order of the day, a process that only adds to the queues for provisions, queues that have become a trademark of the country.

The roll out of a new bolivar in the coming weeks, really looks like nothing more than bills with less zeros. Most are sceptical that it will actually address the root causes of the financial meltdown.

Now while Venezuela is in an economic mess, it is still an oil-rich country. Thus, transport costs are generally affordable, even for the least well-off. The metro system in the capital city Caracas is free, although this is largely down to the fact that a new price for its use has yet to be set in the midst of the never-ending inflation.

Free city transport might sound great, but due to a lack of other vehicle parts such as tyres and break pads, many buses are out of commission.

What’s more, in almost every other sphere, Venezuelans are struggling to make ends meet.

Marisol, the bar lady in what was my local in the city of San Cristóbal, earns 12 million bolívares a month. Considering the monthly minimum wage is 5 million, her earnings are not to be sniffed at.

But where she works, a small beer costs 800 thousand bolivares. Her monthly pay would get her 15 beers if she felt like indulging in search luxuries.

Yet luxuries are things most Venezuelans have to do without these days.

A standard lunch at a basic restaurant generally costs the same as the monthly minimum salary.

Yes, there is a government scheme in place that helps locals get food at discounted prices, but its implementation is neither reliable nor universal.

This has led to millions leaving the country in search of a better life. There is hardly a Venezuelan who doesn’t have a family member abroad. Those at home have come to rely on this foreign money being wired over to sustain them.

Ways have been found to send money so it is converted at the street market rate, which is multiples of the official inter-bank figure.

It’s foreign money that’s been helping my host family in Caracas do, perhaps, slightly better than most.

At the same time, no matter how well-off one is in Venezuela, you can’t buy what’s not there. Provisions remain scarce.

Nonetheless, life goes on, and while the strains of the current hardships are noticeable, the friendly nature of most Venezuelans remains.

Some, such as taxi driver Omar who I chatted with in a San Cristóbal bread shop, wish some sort of outside intervention happened to turn things around. He can’t see any meaningful changes taking place without that.

Others, like pre-school employee and part-time beauty therapist Nancy in Caracas, are doing what they can to survive.

While she is not pro-government, she does feel that a good number of her fellow citizens have become too used to having things handed to them and aren’t prepared to work for a living.

She isn’t hopeful that the situation will improve in the immediate future, but she has no plans to leave the country as many have. With a 15-year-old daughter to continue raising she’s staying put.

“Venezuela is home, and there’s no guarantee things will be better abroad”, she says.

Not all Venezuelans feel the same way.

Brendan Corrigan is an Irish journalist living in Colombia. He blogs at blogs.eltiempo.com/wrong-way-corrigan