Irishman in Shanghai: ‘A city of extremes, 26 million people squashed together’

‘My son was born in China, has grown up here, speaks Chinese, it’s his home, but he’ll never qualify for a Chinese passport’ 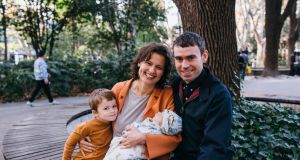 Conor Roche with his wife Gráinne Quinlan and their two children Myles and René in Shanghai. Photograph: Amanda Voelker

China has been our home for the past five years following a two-year stint in Hong Kong. Our two sons were born here, this is where our friends are, and where we work and live.

Shanghai is a city of extremes with more than 26 million people squashed together in a mad urban social experiment.

On the one hand, the city is post-futuristic where facial recognition systems control traffic violations and publicly admonish j-walkers. Metro systems and the largest high speed rail system on earth hurtle more than four million people a day across 25,000km of track. Autonomous taxis are imminent and cash is a phenomenon giggled at in museums. On the other hand, it’s an ancient place of old customs where you can see men scaling fish on the road side in the mornings, nearby live ducks and chickens being sold and butchered in car parks, and hundreds of the elderly congregate at dawn in compact parks to practise Tai Chi.

The working culture is relentless and wild. The writer Patricia Marx wrote: “New York may be the city that never sleeps, but Shanghai doesn’t even sit down.” That relentlessness fuels an infectious entrepreneurial mentality. If you’re under 40 and not chief executive of several companies, you’re not doing it right. We are surrounded by adventurers and a kindred community of fellow travellers. The friendships we’ve made here will last a lifetime.

I’ve been an immigrant for most of my adult life having lived in London and New York, and as a Dubliner, in Cork and Limerick before that. While I have lived away, I have always carried my Irishness with me. The moment someone knows you are Irish you exist among centuries of history, of prejudice, of craic, of green and Guinness, but none of that exists in China. All paddywhackery fades away, it’s useless as a defence or a conversation starter.

There is no context for being Irish in China, it carries little meaning. Being Irish is a very mild curiosity to most Chinese, if it’s a curiosity at all. You are typically another foreigner, another non-Chinese, an outside person (waiguoren). And unlike those other countries where you can assimilate over time, it’s not the same here. You will never be Chinese.

Our eldest son was born here just after we first arrived. He speaks Chinese, all his friends are Chinese and he grew up here. Without a Chinese parent, he will never qualify for a Chinese passport or green card. China is a civilisation first and a nation-state second. You are Chinese by blood. This is their context.

When we walk around our neighbourhood in Shanghai, we are warmly greeted as the waiguoren, which means the “outside people”. My son is greeted as the xiaowaiguoren – the small outside person. It is not meant disparagingly but it does immediately strip you of any idea that this is your home. This is upsetting for my son. He doesn’t understand why he’s an outsider. He’s from Shanghai. Ireland is a fun place to go to at summer, but it’s not home, it’s a second home, but not home.

Our job as parents is to strengthen his own identity. Not as an Irish boy or to pretend that he’s Chinese, because he will never be either. He is a boy growing up in a world where identity should not be viewed in such stark binary terms.

His home and his identity will be his to create and shape. As Shaw said: “Life isn’t about finding yourself. Life is about creating yourself.”

A foreigner’s outsider status is a defence mechanism for the communist party. It keeps you disconnected from civic society. It’s when you live somewhere without a vote and a voice in the community that you realise how important civic engagement is for your wellbeing and how precious democracy. Without it, you are impotent from affecting the world around you.

We know it’s not permanent here. We will have to leave and we will take all that is great about this city with us, but whenever we leave and wherever we land next we will miss Shanghai, it’s our home.