'I broke my mother’s heart when I emigrated to Canada'

‘Ireland and Me’: Mary Curran, Toronto 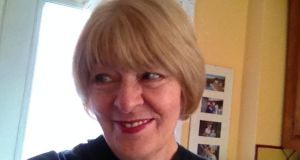 ‘My mother and I explored by car during my journeys home. I learned about relatives dispossessed by emigration or death who once lived in cottages now derelict along country roads in Derry and Donegal.’

I broke my mother’s heart when I emigrated to Canada in 1981. I was the only girl in the family and afterwards I atoned for leaving by frequent summer visits home, especially after my father passed away. For 23 years I missed Irish winters until I received an unexpected Christmas gift.

In December 2004 my mother lived in a nursing home in Derry and one of my brothers provided my plane ticket to join a pre-Christmas surprise family lunch for my mother at an old hotel. I arrived in Dublin five days before Christmas and drove north through the familiar litany of small towns: Slane, Ardee, Carrickmacross, Monaghan, Omagh, Strabane and finally Derry.

I wasn’t homesick but I was wistful when I opened the door of the family home, empty of people but filled with what history leaves behind: furniture, photos, pictures, cups and plates and pots and pans. I sought solace in the practical, turned on the heat and unpacked the suitcase.

I used to ignore my mother’s wordless disapproval of my casual jeans and running shoes during other holidays. But this time I decided to please her and dressed up in a suit and blouse, good shoes and handbag and set off to the hotel. Since I feared for her 85-year-old heart, I called the day before from Toronto to tell her that I was coming, but I didn’t mention the lunch.

The family cars arrived almost simultaneously in the driveway of a very old house, invisible from the main road. We looked prosperous and well dressed, and I thought my mother must be pleased. But mostly I recall the contented surprise on her face and the sounds of laughter and conversation as we ambled into the hotel and stepped down into a moment in history.

My mother and I explored by car during my journeys home. I learned about relatives dispossessed by emigration or death who once lived in cottages now derelict along country roads in Derry and Donegal. I saw the small house still standing outside Derry where she and two friends rented a bed for the nights when sirens warned of possible German planes over head.

She spoke guardedly about the girls who dated American and Canadian service men stationed in Derry during the war. But neither of us expected to see, at a family lunch in 2004, the uniforms, hats, maps and photos of foreign soldiers on display under glass in an old hotel where they were billeted 60 years before.

I left early the next morning to drive south to take a plane to Toronto. I used to think I was making amends to my mother for leaving her, but I know now our journeys together allowed me to connect in the most practical ways the history of an Irish past to my Canadian present and to celebrate and seek consolation in that endeavour.

The Irish Times invited readers abroad to submit reflections on their relationship with the land they left. This story is one we received. To read more, click here. The Irish Times 'Ireland and Me' eBook is available for download here.