Irish in Britain on the royal wedding: ‘I’m agog with indifference’

Will they don a fancy frock and scoff replica wedding cake, or ignore it completely? 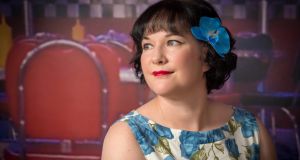 Barbara Rogers: ‘We are going to wear posh frocks and eat a replica wedding cake.’

Prince Harry and Meghan Markle are due to marry among much pomp and ceremony at St George’s Chapel in Windsor Castle on Saturday. Will the Irish around Britain be joining the celebrations? Or are they completely indifferent? We asked them: here’s a selection of responses we received.

I am sick of everyone I know in London asking me what I am doing for the wedding this Saturday. I am doing nothing; I couldn’t imagine a more boring thing to do than to watch the wedding on a TV screen in a pub. It makes me feel strange, like an outsider. Should I care?

I’m originally from a small village on the Ring of Kerry, but I’ve lived in Portsmouth since I came to stay on my sister’s sofa “for the summer” in 1991. I was at a loose end after graduating from Crawford College of Art in Cork and my only other option was to return home to Kerry, which (at the time), wasn’t appealing either for job prospects or social opportunities. I didn’t intend to stay permanently though, and for many years felt I was living a parallel existence here whereas the “real” me was left behind in Ireland, Even now, 27 years later, although I now admit I’m settled - I have an (English) husband, two teenage daughters, two cats and a mortgage - a big part of me is still at home, and I appreciate what I left behind much more now.

Apart from my sister, who has long since moved back home with her husband, I haven’t known any other Irish people over here. I have lost my accent, most people who meet me assume I’m Cornish or from Bristol.

I am looking forward to the wedding on Saturday. I don’t have strong views either way on the royal family; the present monarch is not personally responsible for the atrocities of the past which were committed in the name of Empire. Nobody chooses which skin they’re born into. I wish Harry and Meghan happiness, as I would wish any other young couple of any nationality embarking on a life together. I do think it’s significant that Meghan is divorced and a woman of colour; it shows that the royal family have learned from the disastrous outcomes caused by the prevention of love marriages in the past.

I am celebrating this Saturday by attending a royal wedding party hosted by my good friend Fiona. We are going to wear posh frocks and eat a replica wedding cake which Fiona has ordered from a supermarket, while watching the ceremony on TV. I love fashion and textiles, I have previously worked in both bridal and fashion retail so I am very interested in the dress and can’t wait to see it. We might even throw confetti at the relevant moment, or have a little glass of something sparkling... I’m really looking forward to it. I will be wearing the dress in the attached picture which I made last summer for my parents’ 50th wedding celebration.

I’m a computer game artist from Dublin who’s been living in England for going 12 years. I hate the British monarchy, I hate hearing about their mega-privileged lives, I hate the creepy way some people obsess over them, I hate being reminded that they technically hold a huge amount of power over the government of this country and literally hold a huge amount of social and financial power by virtue of just being born into the right family. They’re a living embodiment of classism, hereditary privilege and unearned wealth. My friends and colleagues have not mentioned the upcoming wedding. I don’t imagine they feel as strongly as I do (my husband, who is English, dislikes the royals too), but they don’t seem to have any interest in the whole silly business. I don’t particularly care about Meghan Markle’s background - I don’t wish her or her new husband any ill-will personally, but I’d really love to never hear about either of them or their family again.

The young members of the British royal family appear indistinguishable from footballers, entertainers, actors and other “celebrities”. A figurehead, embodying the values of a nation, must be more than that. An excellent example is President Michael D Higgins. I may watch the wedding on TV, as I would the Oscars or Six Nations, as a form of entertainment.

I won’t be celebrating. Why would I? They’re nothing to me. But I do love that she is of black, a divorcée, an American, and has Irish Catholic connections, as it will stick in the craw of the many racist Tory Royalists. I think it’s a bit mean to invite people to celebrate your wedding and then tell them to bring a packed lunch. They wouldn’t even try that in Cavan.

I’m originally from Tarbert in Co Kerry. I’m in London since 2002, married to Deirdre who is second generation Irish and we have two boys, Eoin and Paudie. On Saturday, I have a GAA blitz to attend with my eldest at the London Irish / Gael London grounds in Hazlewood with our club Tir Chonaill Gaels, before rushing back to go to Wembley for the FA Cup final with a close friend. I doubt there will be a royal at either event (even the cup final), and I won’t be seeking it out on TV or radio. I don’t believe there is a street party on our road for this wedding, so I don’t have to make excuses on why we won’t be at that.

With any marriage, you wish them well, but being in this constant media spotlight around the world can’t be good for them or any children they may have. It’s the people that have been lining the streets in Windsor since Monday and camp outside the hospital ahead of a royal baby that I can’t fathom.

I won’t watch it. I find the whole thing a combination of two things which I have no interest in: royalty and celebrity. The level of interest in both truly surprises me.

I live about half an hour from where the ceremony will be taking place in Windsor castle and the hype and excitement is huge here. I work in a community setting, and we’ve been warned for weeks about the upcoming traffic problems, and to stay away from the Windsor area as the world’s press gather. I have been invited to street parties and barbecues for the weekend so the excitement is building. Everyone I know will be making a weekend of it and celebrating, even those that don’t give a hoot about the royal family.

I am totally indifferent to any royal wedding. It should be a private affair. A generation ago her counterpart was unacceptable; why should an American divorcée be newsworthy now? Manchester will be way too busy willing Manchester United on to win the FA cup at Wembley, the real event of the day.

To paraphrase Woody Allen when asked about the World Cup being in the US, “I am agog with indifference”.