‘I never imagined I would be a single mother in Sydney’ 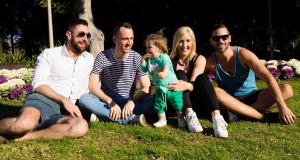 Lorna with her daughter Róisín and friends in Hyde Park in Sydney: ‘I will always remember what my friends and the wider Irish community have done for me.’

In an ongoing series for Irish Times Abroad, people involved with Irish community groups and organisations worldwide share their own migration story and give an insight into the work they do. Here, Lorna Markey tells the story of her journey to Australia, forming Sydney Queer Irish, and the Green Movement gathering for this weekend’s City2Surf fun-run.

I was with my Australian husband for 11 of the 13 years I’ve been in Sydney, and we have a beautiful 13-month old daughter Róisín. Unfortunately we decided to separate four months ago. I never imagined I would be a single mother in Sydney. Although I am here with Róisín on the other side of the world with no other family, I have found strength in myself, being surrounded by friends and an Irish community who have acted as my family during this time.

I was lucky to be able to leave Ireland in 2004 for all the right reasons; fun, curiosity and a sense of adventure. I had finished studying and was working in Dublin in a job that I could have stayed in forever, but at 24 there was more of the world for me to see. My intention was to travel alone to New Zealand, Australia and then Asia for a few years.

As I said my goodbyes to my family and friends, I remember feeling very emotional as I had a sense that I wouldn’t be coming back any time soon. Friends who had already finished their working holidays in Australia reassured me that the time would fly and before I knew it, I would be back in Dublin wondering where the time down under went.

Like many Irish working-holiday makers, I got “stuck” in Sydney due to the fabulous weather, lifestyle and finding love. While I use up most of my annual leave visiting Ireland at least once a year, Australia is now my home.

I work at the Irish Consulate here in Sydney, and am very involved in the Irish community. In 2015, I co-produced the first Irish LGBT float in the Sydney Gay and Lesbian Mardi Gras in a decade, which brought together over 100 Irish-born and Irish-connected Australian LGBT residents, most of whom had never met before.

It was a special time to bring together first, second and third generation Irish Australian LGBT people and their partners and friends to take part in one of the biggest floats in the parade that year, as Ireland was preparing to vote for marriage equality. Many fabulous friendships and a new community were forged that year. Sydney Queer Irish was then born, now one of the most active Irish groups in Sydney.

We have been lucky to host Panti Bliss as our float Queen for the last three years; Panti has a great profile in Australia, and has been a fantastic supporter. The Irish Consulate was the first foreign consulate in Australia to support a float in the Sydney Mardi Gras, which made me very proud. The following year, consulates from the US, Canada and the Netherlands took part.

Ireland and Australia share strong historical, cultural and societal values, and the Irish float finds ways to celebrate the similarities between the two countries. Last year, the float won Best Float Design at the Mardi Gras Awards, out of 180. It continues to grow bigger and better each year; we’ve had participants travel from Ireland and all over the world.

My efforts to create new community initiatives for Irish people in Sydney continue this week with the Green Movement @ City2Surf, the biggest fun run in the southern hemisphere, held every August over 14km from the city centre to Bondi Beach.

This year’s race takes place on Sunday 13th, and is a rite of passage for both locals and visitors, with 80,000 people running and walking together, supported by cheering locals and bands along the way.

My position at the Irish Consulate has made it easy to reach out to the very active Irish community groups here in Sydney to support the Green Movement. The Irish Support Agency and Sydney Queer Irish are two of the most vibrant Irish associations, and both are aware of the importance of community mental and physical wellbeing. The Green Movement is sponsored by Arrive Australia, an Irish-owned migration agency, which has provided green running shirts for participants.

I will be running the race with my best friend Nicola from Waterford by my side, who stayed with me after my separation and helped me every step of the way.

The gay Irish and Australian men in my life have also rallied around me in the past few months, run errands, grocery shopped, bought nappies for Róisín, lent me a car, called and texted and checked in on me, and have generally comforted Róisín and I, exactly like an Irish family would look after one of their own. We may not have my actual family here, but Róisín will never be short of a “guncle” (gay uncle) in her life, that’s for sure.

I will always remember what my friends and the wider Irish community have done for me during this time. I hope in the future I can repay them all when they need it, but for now, all my energy is going into pushing that pram with Róisín in it up Heartbreak Hill (a famously difficult part of the City2Surf) this Sunday.

The Green Movement at City2Surf: facebook.com/TheGreenMovementatCity2Surf

If you are involved with an Irish group or organisation overseas and would like to tell us about it, email abroad@irishtimes.com.