Growing up Irish in London, I lived a double life

My Irish dancing obsession was a source of excitement and embarrassment 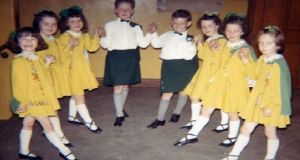 Máire (left) at the Clerkin School of Irish Dancing in London in 1965.

I grew up in North London with my four siblings. My father is from Monaghan. My mother had Irish parents and she is an Irish dancing teacher. We all danced, but I stuck it out and became a teacher and later, adjudicator with the Irish Dancing Commission. So far, so normal.

Except Irish dancing is not normal. Today we can point to the fake tan, curly wigs, and outrageously expensive costumes to prove it. But back in 1960s London, it was abnormal for different reasons. Dancers suffered sleepless nights with spiky hair curlers, and we carried our costumes in black bin liners on the tube to the feis. Boys wore kilts, to their shame. Woe betide if your school friends ever found out this is how you spent your weekends.

When The Irish Post published a picture of me clutching a trophy, I was relieved they got my name wrong; I could deny it was really me. If you were second-generation Irish, you were the worst kind of hybrid. A “Plastic Paddy”. We London-Irish kids juggled our attitude as well as our identity. We could be simultaneously embarrassed by this folk dance hobby, and wildly excited to be traveling to Ireland for a feis.

I lived a teenage double life of feis and disco. My velvet, embroidered dress with white lace collar was stuffed away when the hot pants and platform shoes came out.

On summer holidays, we’d go over to stay at our uncles’ farms in north Monaghan. None of my cousins danced. And here were we, the English ones, Irish dancers! I felt conflicted. I tried to fit into the Monaghan way. But I just couldn’t persuade myself to like Big Tom, Margo or The Indians - country and western bands who played the Scotstown Carnival. And jiving wasn’t proper dancing to this snooty 15-year-old.

As an Irish dance teacher, my schizoid lifestyle continued. Racy weekends in raucous pubs and dubious nightclubs were tempered during the week, by teaching the reel and jig to children in the parish hall.

While many young Irish dancers aspire to Riverdance nowadays, we had no such opportunity in the 70s. Not that I would have been accepted: at 20, I had bright pink hair and wore a leather jacket. This was the punk era.

But the performer in me didn’t want to stop dancing. Shortly after opening my own school of dance, I did a degree in Performing Arts. On graduating, I founded an Irish Dance Theatre Company, The Hairy Marys, with my sister Angela and three other dancers. We spent the next nine years touring, poking fun at the culture, yet always keeping our dance technique up to scratch. Meanwhile, I loved teaching kids at my class, but I wasn’t committed to the whole cut-throat competing side. In the end I chose theatre over the dance school.

I have judged many feiseanna since emigrating to California in 2003 and this year I adjudicated the prestigious World Championships in Dublin. Trying to explain it all to my non-dancing American friends in LA, I describe the technique, the training, the traditions. But I struggle to rationalise the beauty pageant look.

In 2008 I developed a play from a collection of short stories I’d written, called The Bad Arm: Confessions of a Dodgy Irish Dancer, directed by Dan O’Connor. My dance colleagues have been very supportive and if anyone doesn’t like it, they’ve been too polite to say. I am currently writing a screenplay about the curious world of Irish dancing.

Over the years I have toured my show across North America, to Dublin and Edinburgh, and finally home to London this August. It is a drama comedy with dance and theatre; a snapshot of London Irish life from another time, charting the progress of a child confronting life’s harsh realities, of which Irish dancing was a part. Navigating dual identity, coming of age, feis results and parental approval, The Bad Arm is an antidote to Riverdance and its ilk.

Of course I am grateful to beautiful Riverdance for putting Irish dancing on the map. And I love many of the new innovations in Irish dance theatre. But I put forward a non-glitzy, underbelly-exposing interpretation, from an era when families didn’t have to break the bank to participate. In The Bad Arm, the scowling misfit has her say, but actually it’s a loving tribute to a maligned art form.

‘The Bad Arm: Confessions of a Dodgy Irish Dancer’ by Máire Clerkin, is at Tristan Bates Theatre in Covent Garden from August 1st to 5th, as part of the Camden Fringe Festival. Tickets £10. camdenfringe.com