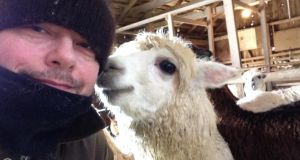 Mark Smullen is a graphic designer and illustrator living in Canada. He works as an art director in Ontario, and he and his wife Darlene also farm alpacas.

How did you get into graphic design, and what does your job involve?

I always knew I wanted to do something arty. As a kid I drew a lot and had a healthy imagination. It’s not easy to earn a decent living as an artist, so graphic design seemed like a better option. I work at Alchemy Systems in Guelph, Ontario. We create custom employee communications for Canadian, American, and global companies. Most of these are about safety awareness. We help companies keep their people safe.

Tell us about the alpaca farming?

If I had told my 25-year-old self that I would be an alpaca farmer in Canada, I wouldn’t have believed it. Alpacas are South American camelids, they are related to llamas and camels. My wife Darlene became interested in them back in 2004, she visited some breeders, and before you know it, I’m an alpaca farmer. In 2005 we moved out of the city (Kitchener, Ontario) and close to the towns of Listowel and Palmerston.

Once a year the alpacas are sheared and their fibre is processed into yarn, which is then turned into hats, gloves, scarves, and other things by Darlene’s small army of knitters and crocheters. We sell the yarn and products at a stall in St Jacobs Farmers’ Market just outside of Waterloo, Ontario.

Why did you leave Ireland, and when?

I left in 1996 when Darlene, my future wife, invited me to come see what life was like in Canada. I liked it, there were plenty of opportunities. But it was quite a culture shock for me when I got here. Things were familiar and yet very different. I was too embarrassed to say “double double” my first time in a Tim Hortons. After 21 years in Canada I still can’t bring myself to say bucks instead of dollars.

Did it take you long to get settled there and were there any particular challenges you faced?

It took a long time to get my immigration status sorted. Their offices were, and still are, understaffed. The first summer and winter here were a bit of a challenge. The temperatures go from one extreme to another. Winter seems great at first, all that snow, everything looking great, but day-to-day life can be a slog.

How did you go about finding a job and were you able to secure one in a reasonable time?

I started out doing freelance work at night, which was good, in that I wasn’t committed to working for one place and I was able to start to get to know the people in the design community. Eventually I found something full-time.

Are you on a visa, or do you have residency/citizenship?

I am a Canadian citizen, which I am very proud to be, and have been for well over 10 years now. Canada has been good to me and I saw it as my civic duty to become a citizen so that I could vote in elections and carry a Canadian passport. After becoming a permanent resident, or “landed immigrant” as they used to call it, there was a set period of time before you could apply for citizenship, it worked out to be a little over three years.

What do you like about where you now live and work?

I live out in the country, which is not without its challenges. What I like about it is the quiet. I can sit out on the deck, read a book or watch the alpacas, or both. The only sounds are the wind, the occasional small aircraft, and distant cows. The two nearest towns are Palmerston and Listowel. There were a lot of Irish settlers in this area. Listowel has an annual “Paddyfest”. Strangely I haven’t met many other Irish people in all of my time in Canada.

How does the cost of living compare to Ireland?

What advice would you give to other Irish people planning to travel to Canada to live and work?

If you want to come and live here full-time, be prepared for a long and frustrating immigration process. It’s worth it in the end though. I would urge anyone to get a Canadian driver’s licence, even if you don’t intend to drive a car. It has become regarded as a standard government ID, and sometimes not having one can be very inconvenient. Getting a licence was easy enough, given that I already had my Irish one. I was able to skip a few steps and take my test sooner.

I miss going for a few drinks after work, and having a local pub. People don’t seem to do that here, at least not in the places I’ve worked. I also miss Jamaica ginger cake, Hob Nobs, gur cake, Tayto cheese and onion, Cidona, Superquinn sausages, proper fish and chips, Dún Laoghaire pier, Blackrock market, Killiney Hill, Hodges Figgis bookshop, The Coach House and Ballinteer House pubs, the not so extreme weather, and everyone I left behind.

Where do you see yourself living in the future?

I don’t know for sure. Probably one of the smaller towns around Kitchener-Waterloo or Guelph, or maybe further north, Fergus or Orangeville. The cost of living in Ireland is too high for me to be able to return and have a decent quality of life. I find that very sad.

If you work in an interesting job overseas and would like to share your experiences, email abroad@irishtimes.com with a little information about you and what you do.