I left Ireland because I’m gay. Now I’m coming back to get married

I wanted to get as far away as I could from 1990s Ireland, so I left for Australia. After the marriage equality referendum, Richard and I are planning our wedding – which we still can’t hold in Perth 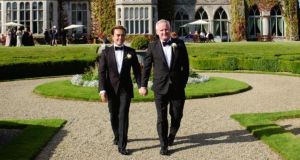 Unconditional love: I met Richard 15 years ago, and we’ve been together for 10. We became civil partners, at Adare Manor in Ireland, two years ago, which has been very important to us, but marriage means so much more

I left Ireland for Australia, in 1991, for the simple reason that I am gay. It is a beautiful irony that, next year, I will return to marry my partner, Richard, something I still cannot do in Australia despite strong public support.

I grew up as one of eight kids in a working-class area in Cork. I attended a Christian Brothers school before going to University College Cork. Then I joined the Smurfit graduate programme in Dublin, which fast-tracked me into a management position. Everything was great on the surface.

In the late 1980s, as I approached my mid 20s, I realised I was gay. It was a shock. Being gay back then was the great unspoken in a family, and I didn’t open up to anyone. The older I got the more pressure there was to have a girlfriend or get married. So it was time to go: if I stayed I’d be settling for a really unhappy life. I wanted to get as far away as I could, and I left for Australia having told only one close friend I was gay.

I knew someone in Perth, so I thought I’d take a year out and be a barman there. I had seen pictures of the Sydney Mardi Gras and thought Perth would be the same, but it was as conservative as Dublin. And my friend turned out to be a born-again Christian, so that put an end to any hope of support from him. I was pretty miserable for that first year.

Fortunately I made contact with an old friend from Cork, Gerry O’Leary, and he and his wife, Geraldine, kept an eye on me. I think they knew something wasn’t quite right. The O’Learys became my Irish family in Australia.

As time went on I made some gay friends and began to embrace my sexuality. Shedding that dual identity and all the lies that went with it was a breath of fresh air.

I came home to visit every two or three years but couldn’t have proper conversations about my life in Australia. It was six years before I came out to my siblings. I never told my parents. They are both dead now. I think they would eventually have been okay with it, though, and I think my mother probably knew. Not too many men in their 30s bring a male friend home from Australia for three weeks. But, in that very Irish way, we never had a conversation about it.

Ireland opened up very quickly after I left. By the early 2000s it was a very vibrant place where being gay was no longer a big issue. But by that time my life was here in Perth.

I retrained in law and opened my own firm five years ago. There’s a very Irish feel to the company, and we work a lot with the Irish community. Two years ago the Irish Embassy invited me to become Honorary Consul to Western Australia. It is a huge privilege. It’s very busy, as there are so many Irish out here at the moment, but I love the work.

The most important part of the role is consular assistance, to provide support when Irish people die or have accidents or end up in court. We process passport applications, develop links with the Australian government and the opposition, and host Irish Government representatives and trade missions. Anything we can do to support jobs and investment is a priority.

I met Richard 15 years ago, and we’ve been together for 10. It’s great to have someone who loves you unconditionally. We became civil partners, at Adare Manor, two years ago, which has been very important to us, but marriage means so much more. I was a nervous wreck for the week up to the referendum. The result was wonderful. It is difficult to describe how happy it has made so many people like me. It will be incredible to bring Richard back to Ireland to marry him next year.

To have different rights from other people because of your sexuality has always gnawed at me. The recent passing of the marriage-equality referendum symbolised for me all that is good and generous about the Irish. Nineteen ninety-one was a different world. I am 100 per cent okay with Ireland now. I have no bitterness or resentment. Only pride.

- In conversation with Ciara Kenny

Do we need to be concerned about taking a Covid-19 vaccine?
5