Competition is fierce and everything is expensive, but the city rewards persistence 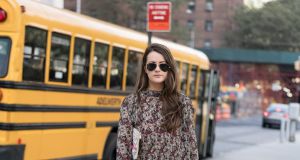 Freya Drohan: ‘You can live in a city of 8 million people and still feel completely lonely.’ 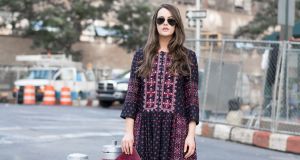 Freya Drohan: ‘Between freak blizzards that leave the city isolated, and sweltering heat waves, be prepared for the whole spectrum of weather conditions.’

I was extremely optimistic about coming to New York, but it is only when you hit the ground that you realise how small a fish (plankton, in fact) you are in this giant ocean of a city.

New York is known as the “Concrete Jungle Where Dreams Are Made” ... and sometimes swallowed up, spat out and served up by a sidewalk food vendor with a side of roasted nuts.

It is true what they say; New York will make or break a person. It’s imperative to keep your head high and remain optimistic, but don’t be fooled that it will be plain sailing. Here are 11 things I wish someone had told me before I made the move.

Sure, NYC is regarded as the centre of the universe if you want to succeed in a field such as entertainment, fashion or business. But for every job you see advertised, there will be a line of people all chasing the same position. Unlike in Ireland, you’re competing against people who have really specific degrees from prestigious universities. This is true even for unpaid internships, some of which require a Master’s degree.

After a while you stop balking at the prices here, but living expenses are extortionate. Whether it’s the cost of getting your laundry washed, shelling out mega money for grocery shopping or getting your head around the added tax and tips when on a night out, start saving your pennies before you get here unless you want to live off the dollar menu.

We all know America is the fattest nation on the planet. It’s only once you get used to your surroundings do you realise how easy it is to fall into the supersized trap. You can buy a burger for 99c or an XXL soda for $2, while a green juice will set you back between $8 and $10. Salads at Applebees can contain over 1,000 calories and the portions in general are huge. Be wise about your food and sugar consumption, check labels, and make sure you are also expending your energy through exercise, or you too could fall victim to the infamous “J1 tonne”.

Never did I think I would be in posession of a pair of snow boots, but they are an absolute necessity during an East Coast winter. Between freak blizzards that leave the city isolated, and sweltering heat waves, be prepared for the whole spectrum of weather conditions.

New Yorkers can be rude

Especially New Yorkers when they are in a rush (which, to be honest is most of the time).  Don’t take it to heart if someone barks at you on the subway, in line at the drug store, or on the side walk, because it inevitably will happen.

You will get lonely

You can live in a city of eight million people and still feel completely lonely. You’re leaving behind the security blanket of family, friends, colleagues and all the familiar faces from your hometown. I have to keep reminding myself that I came here for a reason. Living completely independently has already made me a stronger person.

You will get lost

I can barely tell my lefts from my rights at the best of times, let alone try to navigate Google Maps or the Subway system in a city as big as New York. You will get the hang of it soon enough though; it’s essentially a life-size game of Pac-man as you make your way linearly up and down the streets and avenues.

I’ve found this to be the most frustrating and disheartening aspect of my experience, expecially when trying to find work. I have been in talks with several media companies but once the word “visa” is brought up, they have no interest. Your visa provider will be emailing you deadlines every other week. But persevere, and hopefully you will find an employer who is looking for someone who can bring a different perspective to the table.

They say “it’s not what you know, it’s who you know”. But this mantra is not very helpful when you move halfway across the world to a city where you don’t know anyone, as I did. Before you go, tell everyone about your plans and you never know who they might introduce you to. Reach out online to companies you want to work for, and use social media to network with people you feel might help you get a foot on the career ladder.

How much you will shell out for accommodation often begars belief. For a one bedroom apartment in Manhattan, get ready to part with at least $2,000 a month. Location is key; I’ve been in apartments where the bath is in the kitchen, but once it’s in a desirable area, landlords can still charge through the nose for it. You will need two months rent up front. To avoid broker fees or credit checks, look for a sublet - the Gypsy Housing Facebook group is a good place to start.

Life seems to move a mile a minute here and you will always be running to and from destinations. But don’t let contact slip with those you care about the most. Make time for your family and friends at home no matter how busy you are, as when things go wrong it will be those people you will want to call in the middle of the night to hear a familiar voice.

Despite the challenges I have faced since applying for the J1 graduate visa and moving to New York, I don’t regret it for a minute. I would rather be here grafting to make things work than have remained comfortable but bored in my old job at home.

Freya Drohan works as a content writer for New York, London, Paris and Milan fashion weeks. She blogs about life in New York at Freya.drohan.net.

ESB adds pricing to its slower chargers for electric cars
5