Free as a bird, and looking for a room

An Irish website offers holiday accommodation around the world, as long as you are over 50 years of age 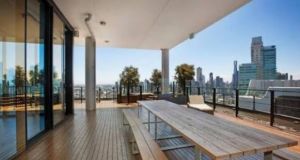 Want to stay in this luxurious apartment in Melbourne for €92 a night? There’s only one catch – you’ve got to be aged 50 or over.

An Irish website which facilitates holiday home-stays among like-minded people over the age of 50, has attracted 1,300 members in 38 countries since its official launch in April.

The Freebird Club’s members can be hosts, guests, or both, and 140 of them are now offering rooms to rent in 23 countries across the globe. Unlike other online accommodation websites, however, Freebird Club members must be present to host guests, and social interaction is a major part of the deal.

The initiative was devised by former research and innovation manager Peter Mangan, who heads up a team of seven at the start-up, which is based at the Guinness Enterprise Centre in Dublin 8.

Mangan came up with the idea for the business when he saw how much enjoyment his father Owen, a semi-retired vet in Killorglin, Co Kerry, was getting out of interacting with guests while managing his son’s holiday rental property.

According to Mangan, the club offers “a whole new way of travelling for older adults, a potential new source of sustainable income, and a fun and accessible way to meet new people and enjoy companionship in later life”.

He also sees the club as having potential “to mobilise the senior Irish diaspora”, and is working with diaspora organisations in this regard. “With this in mind we are doing a project with the London Irish Centre this autumn whereby we intend to bring a group of elderly Irish from the London Centre’s socialisation service to stay with Freebird hosts in Kerry.

“We have a vision of creating an ongoing Senior Gathering effect, whereby older Irish diaspora have an opportunity to stay with similar aged peers in their place of origin in Ireland,” Mangan says.

For those who want to travel further afield, there is a wide variety of accommodation all over the world available on the website. Members can choose between an $11/€9 a night room with shared bathroom in a Bangkok apartment belonging to Cliff (first names only are used in the initial stages of the process), who relocated there from San Francisco, or splurge $230/€193 a night to stay with Concha in her luxurious home in Mexico City. In most cases, the cost of the room, including breakfast, is the same for either one or two guests.

Security concerns are addressed, Mangan believes, by the steps involved in joining, which include payment of a once-off fee of €25 by credit or debit card, submission of a personal profile, and provision of contact details, which are verified. Members can opt-in to a “buddy” system whereby they can nominate a family member or friend to have access to their reservation details.

Prospective hosts must, in addition, undergo an “induction interview” over Skype, provide proof of address, and upload their passport or driving licence. Bank details are also required as payments are processed by the club, which charges guests a 12 percent commission, in addition to 3 per cent from hosts, plus VAT.

Ilona Pflaumbaum, who has been living in Ireland since 2004, has used the club to book holiday accommodation in Ireland as well as in her native Germany. She heard about the club from a friend.

“I absolutely liked the idea from the beginning, especially the social aspect of it. I know that many people over 50 are on their own, including myself, as my husband passed away five years ago, and for some it is not easy to socialise in this age.”

Last month Pfaumbaum stayed with host Dervilla in Ballinamuck, Co Longford, paying €45 a night to enjoy a short break with her friend Joan. She was also hosted by Thomas, in his old rectory in Buckau in Germany, on trip to visit her new grandchild. On that occasions she was accompanied by her sister Karina.

“Thomas and his wife Ute are grandparents too, and it was nice to share stories of the children,” she says. Thomas is one of the hosts who charges less for a single room, €33, as against €76 for two guests.

“Both of the properties were stunning,” Pfaumbaum says, but it was staying in a family home with like-minded hosts that appealed most to her, as she wanted “to have a nice time with interesting people”. She says she checked out hosts’ personal profiles to see if their interests corresponded with her own.

“The social aspect is absolutely more interesting for me than the offer of accommodation (which you can find plenty of on the internet). This is what makes Freebird Club unique, in that it is really about socialising and bringing people together.”

As she is used to travelling alone and using online accommodation websites, she says she had no concerns about moving in with strangers. “I think I adapt easily to new people and new circumstances, and as we are all in the club together, it was easier to feel comfortable with my choice.”

Larry and Mary Brouder and their 14-year-old daughter Emily, from Connecticut in the US, spent two nights of their summer holiday in Ireland with Freebird founder Peter Mangan’s father Owen in his home in Killorglin, Co Kerry. They too heard about the club from a friend, “and were intrigued, so we built in a stay in the middle of the trip we had planned”.

“We had such wonderful times everywhere we went, but the times with Owen were the most special. Owen was an engaging host, and we ended up going to dinner with him and a number of his friends and had a fantastic time. Everyone made us feel at home, and we laughed at the stories shared all evening.”

There is an option on the property listing to specify the level of interaction with guests that hosts offer and Owen, a widower, states that his preference is to “spend some time together visiting local sights”.

“He took us to the shore and to the top of a somewhat steep drive where the sights of the surrounding hills and lakes were incredible,” says Brouder, who together with his wife works in the corporate relocation industry.

He has used online accommodation booking websites for work-related travel, but nothing like the Freebird offering, and admits he was a bit nervous about the process. “It’s always a bit of a risk, but we felt comfortable with the way Freebird allowed us to connect with Owen beforehand and that gave us some comfort.”

The couple say they would consider becoming Freebird hosts. “With a teenager, we may wait a few years until the place quiets down a bit.”

Margaret Treanor, who took early retirement from her career the insurance industry, spent two weeks with a Freebird host in Provence this summer, as part of an almost month-long trip. She has been studying French for 18 months, and her intention was to improve her proficiency in the language.

“I decided on my location first, then looked at what was available,” she says.

“If you are selecting this form of accommodation, you would have to travel with an open mind. Of course there was mild apprehension on my part, which I am happy to say was immediately put to rest, as my host was wonderful. I was happy to fit into their family arrangements and they likewise were more that willing to meet my needs.”

Treanor believes the website offers something unique. “In my view the Freebird Club has hit on a perfect gap in the market. The youngsters use hostels, for the over-50s this is perfect, as you avoid what may be the impersonal aspect of a hotel or apartment let, you have the opportunity to tap into your host’s local knowledge, and in my case, to enjoy the normal banter of their daily life. I believe my stay was good value, in addition, you cannot put a price on hospitality or on local knowledge.”

She plans to use the club to book further holidays in the future. “I have no doubt in the dark days of January and February next I will be found trawling the Freebird website to see what opportunities are open to me for 2018 and beyond.”

See freebirdclub.com. The company is a finalist in the European Social Innovation Tournament, which takes place in Riga, Latvia on September 21st and is organised by the European Investment Bank