Emigrants are passionate about Ireland. Give us the vote

Opinion: We demonstrated our commitment by coming #hometovote again in 2018 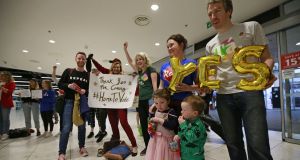 Emigrants travelled back to Ireland from all over the world in May 2018 to vote in the referendum on the Eighth Amendment. Photograph: Nick Bradshaw/The Irish Times

I’m standing between carriages and have somehow found myself in possession of a toddler. He’s got wild red hair, and is periodically pressing the “OPEN DOOR” button to the amusement and eventual frustration of other passengers. He’s two or three, the son of one of the women making the journey home.

It’s May 25th, 2018, and we’ve boarded a train (and a boat, and a bus) to make ourselves heard. There’s going to be a panicked rush to get back to Galway, and Cork, and Ennis, in time to make the final hours of polling. One of us will hitch a lift on a motorbike to Heuston in order to make her train after the boat is delayed.

We are, as the hashtag goes, #hometovote.

But I’m not. I’ve been living in London for six years and as such I’ve lost my right to vote - which expires 18 months after taking off from Dublin Airport. Those who are lucky enough to be still within the window have to spend their Brexit-depleted pounds on flights, and take the Friday off work, in order to cast their ballots.

And all I can think is: it shouldn’t be this way.

Because in most countries, it isn’t.

Ireland has some of the most restrictive voting rights in the Western world for its emigrants. While 93 countries make allowances for their emigrant citizens to vote, including dozens of European countries, it’s somehow an issue that Ireland has let slide for far too long. A country that prides itself on its relationship to its diaspora, on its reputation across the world, on its hard and tragic history of its children leaving out of choice and out of necessity, still hasn’t found a way to enfranchise its emigrant citizens in the most important way of all.

There’s a chance for all that to change in 2019. A referendum has been proposed which would allow Irish citizens living abroad to vote in Presidential elections. It would allow emigrants like me, who’ve been “gone too long” and yet visit Ireland seven or eight times a year, to have a say in the future of the country. It would mean that the right to vote for those who left more recently won’t be dictated by their financial and scheduling freedom (an irony that wasn’t lost on voters who returned in May, in order to end lonely trips for women coming in the other direction).

As you travel home this festive season, watch our beautiful video on emigrant experiences and #hometovote. And let us know what you think on #emvote pic.twitter.com/XEPVurghDG

What the referendum proposes is simply a logical move that would put us in line with so much of the rest of the world. The Government has yet to clarify the exact heads of the bill, but it’s time they opted for a system that aligns to a core tenet of human history - that when a country lets more of her citizens cast a vote, that country becomes enriched. It was true of the vote for women 100 years ago, and it’s true of the brothers, sisters, children and friends living abroad now.

The Government won’t be short of models on which to base their plans. Many countries - such as Sweden and the United States - allow voting rights for life, while others - such as the UK and Australia - impose reasonable time limits for those who’ve left. The idea of having to travel home to vote is almost non-existent, with many offering postal votes, or the opportunity to visit a local consulate or embassy. Such were the scenes outside French embassies earlier this year during the election of Emmanuel Macron. France offers full voting rights for life to her citizens whether at home or abroad, and by the presence of specific representatives for the diaspora allows emigrants to vote for politicians who will have their best interests at heart.

And what are those interests? There are some who’d tell you that the moment an Irish person leaves they’ve reneged on their promises to the country, that they’ve turned their back on their home, and as such should be stripped of their rights. The phrase “no representation without taxation” is bandied about, an alarming inversion that strips the vote of everyone from the 20-year-old student to the 70-year-old pensioner (as well as treating the democratic vote not as a right, but as a privilege only to be given to those deemed worthy - in this case by their bank balance).

In truth, Irish people abroad have the same political concerns as those living at home. A decent health service, to support our relatives. A well-maintained education system that prepares our youth for the world of today. A President who, god-willing, doesn’t make a holy show of us on the global stage.

We’re interested in a progressive, outward facing view of the world - from equal marriage to abortion rights to, yes, emigrant voting.

There are also issues that are specific to emigrants - and a lot of them are linked to that oft-heard phrase “do you ever think of coming home?” Irish people have been emigrating for hundreds of years, and for just as long we have come back - and with advances in communication and transport coming back is easier than ever. To feel cut off from the country while you’re away, to have no part in the direction it takes, it doesn’t align with the “céad míle fáilte ar ais” message the government are trying to promote. We care about the country we’re returning to - and we’d like to know it cares about us.

The debate around emigrant voting rights is one that has been kicked around for decades, but next year’s referendum offers a chance to educate ourselves about the normality of a system that treats citizens equally, whether at home or abroad. The Government’s extensive research on the subject has shown that any fears on emigrant votes “swamping” resident votes are not borne out in other nations. For the UK, only 5 per cent of its eligible emigrant voters are even on the register, while in Canada just 15,000 out of 2 million are.

This referendum offers us an opportunity to discuss the issue in a way we haven’t before - to educate ourselves, to listen to each other, to understand why the right to vote has not just an intellectual but an emotional importance for those of us living abroad.

Because the right to vote shouldn’t be something we hoard - and rescinding it shouldn’t be a punishment for the perceived slight of leaving the country for economic or personal reasons. It should be looked at as an opportunity to widen the conversation on what Ireland is and what it can be, to recognise that our history is bound up in our connection to our emigrants, and those emigrants have a passion for Ireland that has only been deepened by the distance.

That’s why when Ireland voted in a referendum in 2015, and again this year, the voice of emigrants was heard around the world - whether it was those who could afford to come back, or those who made heartfelt phone call after phone call to make sure in some way their opinion mattered.

And because I wanted to say that we’re still here. We still care. We’re still passionate about our country.

And it’s time that passion was acknowledged.

Alan Flanagan is a member of the Votes for Irish Citizens Abroad campaign in London.