‘We Built This City’: The Irish men and women of post-War Birmingham 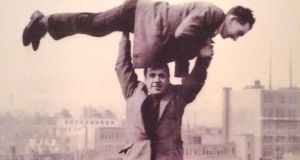 Fabian Cowan is lifted aloft by his friend Larry Miller while another friend takes their photograph as they worked on construction of the Marks & Spencer building in High Street. Photograph: courtesy of the Cowan family

An exhibition recording the contribution Irish workers made to the rebuilding of Birmingham in the post-War period has attracted record numbers of visitors to the city’s museum and art gallery.

We Built This City uses oral histories recorded in conversations with 35 Irish immigrants, photographs, archive footage and reconstructions to convey the experiences of the Irish immigrant population that flocked to the city to work on building sites, in road construction, on railways and buses, and in hospitals and factories.

The Heritage Lottery-funded project took 12 months to put together, and the exhibition, which opened on March 11th, has been extended to run until June 4th at the Birmingham Museum and Art Gallery.

Yvonne Price, a project co-ordinator for the exhibition, was born in Birmingham to Irish parents who came to the city from Kildare. She has worked with the Birmingham Irish Association on a variety of projects over the past 10 years.

In addition to the spoken word testimonies from contributors, photographs and film footage, there are installations recreating a typical bedsit, and a transit van transporting workers. “We recreated a bedsit showing the isolation experienced by the young men and women arriving from Ireland, ” says Price.

To locate contributors for the oral histories, a publicity campaign was launched using an archive photograph of workers constructing the city’s infamous ‘Spaghetti Junction’, asking the question, “Where are they now?”. The response was overwhelming. “We could have recorded 3,500 stories never mind 35. We are still receiving offers now,” she says.

“The recordings set the tone. I listened to every story and noted the things that touched me, things that demonstrated just how hard it was, but no one complained, how the communities developed, how the Irish in Birmingham sent money home and how they still, no matter what, enjoyed the craic.”

A video using archive footage made by No Fuss Productions to accompany the exhibition can be watched on YouTube, and a souvenir newspaper recording the oral histories and photographs was printed.

What follows are extracts from some of the stories told by contributors to the project, and photographs illustrating their experiences, reproduced by kind permission of the exhibition organisers and the photographers credited, or their representatives.

CARMEL GIRLING, WRITING ABOUT HER FATHER:

“My father, Fabian Francis Xavier Cowan, was born in 1927 in Welsley Place, Dublin, the youngest of nine children in a family that had been well off in the Edwardian times but which had fallen on hard times. His mother Mary Cowan (nee Synott) had been home educated and was a teacher, whilst his father, James, was a fine carpenter and cabinet maker and is believed to have worked on the Titanic.

“Fabian had a good education, taught by Jesuit brothers at O’Connell’s school on North Circular Road Dublin, and was a talented man able to play the piano with skill and indeed any instrument he could pick up. As a young man, before leaving Ireland, he did his national service with The Irish Army in the Engineers.

“He arrived in the city with a brown paper bag clutching his few clothes and little else. With no money or anywhere to stay, he slept rough on New Street railway station until he got a ‘sub’ (financial advance from wages) from his first job on the buildings.

“Why Fabian had a camera when he had little else was probably because he was from a creative family and he may have acquired it from one of his older brothers. The brothers were all fascinated by the developing media, taking pictures and experimenting turning black and white images into colour.

“Fabian himself turned any spare space into a dark room to develop his own images – these are just a few examples. Forgotten for four decades, rolls of negatives were found in a biscuit tin in the garden shed after he passed away in 2004.

“I drove a cattle lorry in 1953. There was a lot of cattle across the borders them times. I drove from Belfast market to Dublin market but the cattle failed. There was no work so that bought me here to work. I was 21 and travelled alone. I worked with Mason McCabe contractors from Castle Blayney then I went to Gallagher’s to drive a lorry and then they took me off the lorry and put me in charge of demolition, and I was on it for 44 years.

“Accommodation was one room with a bed, gas ring and two in a room. 30 bob a week. We used the laundry once a week, you put a shilling in the meter to get the gas, one ring is all they supplied for you with a kettle, pan and bowl. At that time you knew the English wouldn’t take the Irishmen, there was signs ‘No Irish No Blacks, No Dogs’. You had to get used to it, you had no choice.”

“I was one of 10 kids. Then one day my Dad said, ‘Mary you really have no business here, you have nothing here you’d get a better job in England. ’ So I wrote to people in Dublin, the nuns actually, they sent a form and got me a job on the Hagley Road in a nursing club.

“I arrived in 1952 the first thing I done was to go to St Catherine’s, because my love was for dancing, ceilidh, you name it. I went for five to six weeks and met my husband, Michael. My husband had a lot of jobs over here. He worked for Wimpy, and they got the Rotunda. It was a long job from start to finish. I got the fright of my life when I went up there in the lift and from this day I won’t go in a lift. It was 280 foot high. It was very hard work from 5am till 11pm. The Rotunda was hard, quite a lot of lads were killed, but they had good fun.”

“I’m from the Mountains of Kerry and at that time people were coming back from England in nice clothes and if you had a watch, Oh My God, and if you had a bracelet watch! I was about 18 and I seen the fellows and decided to go on the beat with them. I took off on the ‘Princess Maud’, arrived in England. I lived in hostels.”

“I came to Birmingham from Belfast after my father had got in at a factory. He could do anything, he was a carpenter and he could sole shoes. He stayed with his brother then he got a back-to-back house in Hope Street off Gooch Street. The yard had 10 houses on it. My mother said, “where is my back door?” My dad said that it’s your front and back. The toilet was across the yard and the dust bins, the brew house for the washing.”