Irish Connections: When Louis XV saw a painting of a naked 15-year-old, he wanted to see more 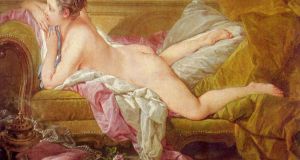 Curly wigs and straining bustiers; political shenanigans and sexual skulduggery. The second series of the historical drama Versailles, currently showing on BBC 2, recreates the pouting, shrugging and backstabbing that passed for normal life at the palace of the “sun king”. It’s all very Gallic – but once upon a time, a young Irish woman roamed those gilded corridors and played a role in those intrigues.

In 1753 the Marquis D’Argenson wrote in his diary: “The King had a new mistress . . . she belonged to a family of prostitutes and thieves.”

By the mid 18th century the king in question was Louis XV, the sun king’s great-grandson. This Louis was a keen botanist and a generous patron of the sciences. Like his illustrious ancestor, however, he had an eye for the ladies. And when he saw François Boucher’s painting of a naked 15-year-old lying on a couch, he wanted to see more of the model.

Extensive research by art historians has revealed the luminous girl in the painting to be one Marie-Louise O’Murphy. Born in Rouen, she was the youngest in a family of 12. Her grandfather, Daniel Murphy, was an Irish Jacobite soldier who fled to France after the defeat of James II and settled in Rouen where, according to his marriage certificate, he worked as a master shoemaker.

There was, clearly, a great deal more to Marie-Louise O’Murphy than the guileless “innocent” portrayed by Boucher’s painting

Her father, Daniel Morfi, was involved in more nefarious activities: two years before Marie-Louise was born he was imprisoned in the Bastille, charged with espionage and blackmail. Meanwhile Marie-Louise’s mother, Margaret Iquy – who was also Irish – served a number of prison terms for prostitution.

After Daniel’s death Margaret moved her family to Paris, making ends meet as best she could. Her methods of earning a living brought her to the attention of one Jean Meunier, a police inspector in what must have been the contemporary equivalent of the vice squad, who wrote about the O’Murphy sisters in his diary for 1753.

Meunier reported that when Louis saw Boucher’s painting of Marie-Louise, the king wondered whether the painter hadn’t flattered the model, “so he asked to see the youngest Morphi, and after their meeting, he found her even better than the painting”.

Marie-Louise was installed in a house at the Parc-aux-Cerfs in Versailles, where she lived for two years. In 1754 she gave birth to Louis’s illegitimate daughter, Agathe-Louise de Saint-Antoine de Saint-Andre.

The king, by all accounts, was extremely fond of Marie-Louise, and most women of her class would probably have been more than happy with the situation. But Marie-Louise was ambitious. She mounted a challenge on Louis’s all-powerful chief mistress, Madame de Pompadour, attempting to take her place at court. As a result she was spirited away from Versailles at dead of night and married off to a compliant young soldier, Jacques Pelet de Beaufranchet.

It wasn’t such a bad fate: her husband was young and handsome, and she was given a decent pension. They had two children together. When Jacques was killed in action in 1757 Marie-Louise was married off again, this time to an older nobleman and financier. It’s sobering to realise that, at this point in her eventful life, she was just 22.

When her second husband died Marie-Louise got a bigger pension – and proceeded to make herself even richer through the Ferme Generale, a sort of official tax scam operated by the ancien régime. This got her into trouble with the revolutionary authorities, but she survived the Reign of Terror and married one of the new MPs, a man 30 years her junior.

It would be wonderful to be able to report that they lived happily ever after, but the third marriage ended in divorce and Marie-Louise eventually died, aged 77, at the house of her daughter Marguerite.

There was, clearly, a great deal more to Marie-Louise O’Murphy than the guileless “innocent” portrayed by Boucher’s painting. There are several versions of the work, but the best-known now hangs in the Alte Pinotek in Munich, the oldest art museum in the world, famous for its collection of Old Masters. Would this determined Irishwoman be content with that? I wouldn’t bet on it.