Beyoncé at Coachella: A definitive moment for black women in America

As a white Irish woman in the US, I see subtle ways black women are discriminated against every day 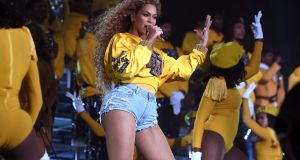 Beyonce Knowles’ performance at Coachella Valley Music And Arts Festival in California on Saturday has been described by The New York Times as the most ‘meaningful, absorbing, forceful and radical performance by an American musician this year’. Photograph: Larry Busacca/Getty Images for Coachella

On Saturday night, at Coachella in California, history was made. Beyoncé became the first black woman to headline the music festival. It was, from start to finish, the greatest live musical performance I have ever seen. Maybe even the best performance of all time. It was extraordinary. And in a week where two black men were arrested in a Starbucks in Philadelphia for doing absolutely nothing other than sitting at a table while being black, Beyonce’s mind-blowing performance was even more important and meaningful.

Black men and women in America are under siege. Since I first set foot in the US 19 years ago, I could see something was really wrong. In my years of living and travelling around the US, I have come to learn something about the constant assault upon black people in my adopted country. It’s systemic, it’s pervasive and it’s brutally oppressive.

The majority of the news we hear of violence against black people are the shootings of boys and men by police. Recently, a man talking on his cell phone in his back garden in Sacramento was shot dead by police. It happens every day and is a direct result of the legacy of slavery and racism America has not even begun to effectively reckon with.

These words are truth. Black women in America are subjected to the kind of second-class citizenry that white women can only imagine in their worst nightmares. When the TV adaptation of The Handmaid’s Tale became a rallying call to arms for women across the world, it was overlooked that black women in America had already experienced it. America’s darkest sin, as yet un-reconciled, was 245 years of the kind of horror Margaret Atwood’s ancestors would have nightmares about.

The misogyny directed at black women in hip-hop or rap is horrendous. When I was growing up, I listened to a lot of it. So immersed in the music, I failed to hear or understand what the words meant. Listening now, I hear lyrics that, at best, celebrate the degradation of black women, and at worst, encourage rape, sexual violence and murder. The accompanying videos are often a grotesque display of misogyny, devaluing black women’s bodies, signaling them as property, disposable things to be owned or used.

When it’s 2018, and it’s the first year that a black woman has headlined a major US music festival it’s time to celebrate, but also, it’s time to look at why it’s taken this long. Beyoncé’s performance at Coachella was an overt, beautiful representation and celebration of blackness in America. From the New Orleans style brass band to the dancers and choreography, this was a performance that was about more than music. It was an awesome and powerful moment in black culture.

Black women hold this country together. In communities across America, they are fighting racial injustices, holding down jobs that pay 63 cents on the dollar compared to men, nurturing and protecting black boys from police brutality and enduring degrading discrimination every day of their lives.

When the state of Alabama held a special election for US Senate seat (Attorney General Jeff Sessions’ old seat), black women turned out to upset the historically red state and stop Roy Moore from being elected. Moore was the subject of accusations of sexual assault, some on teenagers, and believes all constitutional amendments pertaining to the protection of black people and women’s rights should be eliminated. Most white women in Alabama voted for him, including those with college degrees.

As a white-skinned Irish woman in America, I see subtle and painful ways that black women are discriminated against every day. I watch as white Americans rightfully decry police violence against black boys and men, and wonder where their voices are for the black women who put the pieces back together afterwards. I listen to friends as they question how their girls will fight the misogyny that permeates so much of hip-hop and rap.

In a week where two innocent black men were arrested for literally just sitting at a table, it’s easy to say that all is lost, that America cannot get a hold of its racism. But then a woman takes to a stage in California, surrounded by powerful black bodies, booming out the sounds of sousaphones and drums and African beats, letting us know that fierce and indomitable spirits will overcome. Black women, they get in formation, and they continue to rescue the United States from itself.