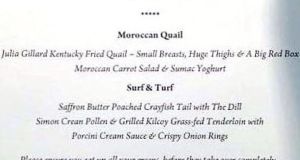 Australia’s prime minister Julia Gillard called on the opposition Liberal Party to deselect one of its candidates over a fundraising menu that contains crude references to her breasts, thighs and genitalia.

Ms Gillard described the menu as “grossly sexist and offensive”. She said the menu typified Liberal Party behaviour and that of its leader, Tony Abbott.

“Mr Abbott’s solution to this pattern of behaviour is not to show any leadership,” she said.

“Mr Brough is retaining his endorsement. Presumably if Mr Abbott becomes prime minister, Mr Brough will be a senior minister in the Abbott government. Is Mr Abbott ruling out giving him the portfolio of the status of women? Mr Brough should be disendorsed.”

Mr Abbott, who is expected to win power by a landslide in September’s federal election, condemned the use of the menu, but said it will not affect Mr Brough’s pre-selection.

“I think we should all be bigger and better than that; whether it’s a tacky, scatological menu out the front of a Liberal Party event, whether it’s squalid jokes told at union conference dinners with ministers present,” he said.

“This bloke has been an elected member of parliament for many years, a former minister of the Howard government – sees himself as a future leader of the Liberal Party, and thought he could get away with a snide, dirty, and I think sexist trick in his own electorate for a fundraiser.”

9 I got rid of 95% of my stuff, almost everything I’ve ever owned