Who hasn’t looked back on college and wished they’d had less sex?

Starting college? Then don’t drink too much and don’t touch prohibited drugs. Really 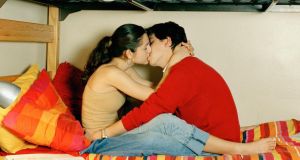 Don’t have sex: All that chatter about carnal ecstasy is just a cover. Photograph: Getty

Dear Oisín, Barnacle or whatever new students are called these days, I’m sure you have no interest in the whitterings of a greyhair, but if you can incline an ear for a moment you might learn a few things that will help in your preparations for college. The wind is at your back. The sweet juice of youth oils your progress. Reach down into the silt that gathers around your feet. From this you will fashion the future.

You know? All that balderdash.

Do not drink too much and do not touch prohibited drugs. If you think that anybody writing for this newspaper looks back with anything other than regret at the hours they spent swallowing afternoon pints while chewing over the latest developments in Krautrock then you are deluded.

Nobody of our age ever gazes pathetically at the stained glass of a familiar pub and imagines that they see their younger silhouette in happy drunkenness.

No such person ever laughs warmly at memories of illicit inflammables constructed on the gatefold sleeves of vinyl LPs. That stuff leads only to regret, lost lives and buying Wibbly Wobbly Wonders at 3am. Don’t do it.

An adviser reminds me to warn against sex. This wasn’t something I had much experience of, but I’m told that the temporary gratification achieved through tumbling into bed – or about bushes or behind sofas – is soon overwhelmed by emotional turmoil and spiritual dissatisfaction.

Who among us has not looked back on their college days and wished they had had just a little less sex? Who has not wished we’d left Janet (or John) panting with frustrated consent and retired for contour integrals or The Faerie Queene? All that chatter about carnal ecstasy is just a cover for the envy the sexed-up feel for those in a state of blissful celibacy. Don’t have sex. You won’t like it.

Maybe I’m being a little disingenuous in the above. But here’s something you really do need to know. Be nice to the socially awkward and the scruffily ignored. Be nicer still if they respond to your advances with ungrateful hostility.

If you have managed to make friends with one of the elite groups then use that advantage to help the rude, slovenly outcast – let’s call him Forrest McArmpit – towards his own top-table associations. Rise above the snooty disapproval of your friends.

The urge towards superficial judgment is one of humanity’s least attractive traits. When you get to know Forrest McArmpit you may well discover that he has an inner loveliness more radiant than that displayed outwardly by the university’s most beautiful people. He probably doesn’t, of course.

Here’s the thing. Forrest McArmpit is just the sort of bastard who will snake his way towards positions of power in the real world. Accustomed to exclusion, he will have quietly accumulated enormous reservoirs of ambition and will already have resentfully plotted future humiliations for those who shunned him as an undergraduate. Trust me on this.

At some point in 2032 or so you will, after steady advance in the Martian irrigation project, be sent for an interview with the senior vice-president. It’s Forrest McArmpit, and, remembering how you failed to cast him in a student production of Endgame, he is set to make your life more miserable than those of any of the characters in that famously gloomy play.

Meanwhile the handsome young fellow who played Clov is working at an all-night garage in Mullingar. Real life is horrible, and it rewards those who least deserve it. So be nice to jerks.

If you must play filthy sport then play filthy sport. See if I care. But the college societies you most need to join are those that organise elections for meaningless committee positions. The acting, the debating, the metal detecting and the yachting are all good fun, but what matters most is the jockeying for power that helps decide who gets to call themselves president, chairman, auditor or cap’n. This is where the hoods who surrounded Richard Nixon learned their dirty tricks.

The college election teaches you all you need to know about the wretchedness of everyday social interaction. After 30 years I have still not forgiven four friends – at least two now enormously distinguished – for drinking pints in O’Neill’s on Suffolk Street when they should have been casting votes for me as president of Dublin University Players. I lost by three to somebody with soberer friends.

Here is my final advice. Do not put a brave face on disappointments. Do not turn the other cheek. Allow such annoyances to fester throughout the rest of your bitter life. If all goes well you may, in 2046 or thereabouts, get a chance to vent them in whatever then passes for a newspaper column.