The visual art at this year's Galway International Arts Festival has lots of odd junctures, strange characters and weird journeys 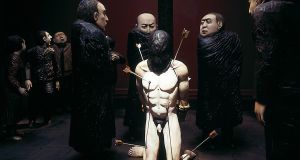 Two years ago Australian artist Patricia Piccinini populated the main gallery at the Galway International Arts Festival with oddly loveable creatures in her exhibition Relativity. These hybrid animals, anthropomorphic car parts, and humanoid figures weren’t quite “normal”, yet had a touching presence.

By showing such difference in an uncompromising yet compassionate way, the artist created space for a greater understanding that we’re all deeply weird; and that “normal” can be a crushing concept.

For this year’s festival the gallery at the former Connacht Tribune printworks is again filled with figures, this time the wood carvings of UK-based Brazilian artist Ana Maria Pacheco.

There are two main larger-than-life groups in separate spaces within the gallery. The first, The Longest Journey, shows a ship containing 10 human figures. They are wide-faced, maybe in the manner of something like the work of Fernando Botero, the Colombian figurative artist and sculptor. Their energy and power comes from their quietly contained strength, and the dynamic way the artist has arranged the grouping.

At the prow of the boat are three white-robed adults, watching over the boat’s progress and its passengers. The passengers, a mix of adults and children, perhaps a family, are seated and standing in the stern. Their gazes turn in all directions, some with introspection, some as if trying to see the way ahead and into the future. The youngest, a boy, is wearing a striped top and no pants.

The genius of Pacheco is that she can create so many layers of narrative and meaning within a single work. The semi-clothed boy is part nature, part innocence, part vulnerability. The shrouded figures are either officers or guards, religious elders or otherworldly beings.

These days it’s difficult to see an art work representing a boat in such circumstances without thinking of the current refugee crisis, although the date of this work, 1994, shows its quality is more timeless than that.

“I like to make works that are with the world and in the world,” the artist says, adding that this means they will always resonate and be universal. The title of the work comes from a DH Lawrence poem, The Ship of Death: “Build then the ship of death, for you must take / The longest journey, to oblivion.”

That might seem like a pretty gloomy thought, but in Pacheco’s rendering the hand-carved figures are hopeful. After all, the time between birth and death is what we experience as life. “I like journeys,” she says. “Life is a journey.”

Elsewhere in the gallery are suites of Pacheco’s drypoint prints. Again, comparisons emerge with Alice Maher and Rita Duffy in both the mood, feel and style, and in choices of mythic (and also religious) subject matter.

Pacheco is also a story teller. The Miraculous Journey of a Little Vixen, a series of 10 prints, tell a Hogarth-like tale of a fox who escapes great perils to ride to the heavens on a winged deer. “Foxes are survivors,” says Pacheco.

The other main grouping in the gallery is based on the artist’s time on residency at London’s National Gallery. Made in response to Antonio and Piero del Pollaiuolo’s The Martyrdom of Saint Sebastian, Pacheco’s Dark Night of the Soul has 19 larger-than-life figures sculpted from lime wood and hand-coloured, painstakingly by cotton bud. Their deep eyes are agate or onyx, while their teeth are not-quite-human, in that they come from a dental supplier.

Initially overwhelming, as you walk among them they become familiar and human in a profound way. You begin to feel affinities, and to contemplate your own comfortable strangeness.

One of the most interesting things about arts festivals is the opportunity to make connections, so while Galway’s sprawling programme doesn’t have any particular thematic drive, stories start to appear.

Accompanying Pacheco in the main gallery is Inscriptions, a series of photographs by Ailbhe Ní Bhriain. The photos are gentle black and whites, building from #2, an image of what appears to be a suspended white sheet, to #8, a collage including a bird of prey on a plinth.

They’re fragile works, and serve as reminders of this artist’s hauntingly brilliant films in which time and space collapse, and beautiful strangeness is the order of the day. I found myself wishing for more, and for the films to accompany them.

In a similar way, the latest of Enda Walsh’s Rooms in his now annual series is Bathroom, and I found myself wishing for a little more darkness. Previously the audience sat on a bed in a gloomy construction of a flophouse as the lights went down, and listened to the dying words of a travelling salesman. Kitchen and Girl’s Bedroom were similarly satisfyingly dark.

Here the audience sits in small groups in a bathroom, pristine save for its smashed sink with the offending mallet beside. Paul Reid’s voiceover takes you on a journey through mental breakdown, looking for clues to the implied violence to come.

This time the bathroom is kept deliberately bright, perhaps to show that the most awful things can happen in broad daylight. But despite the expected brilliance of the writing (a pub that smells of “cheese and disappointment”), this prevented me from going into the dark places in my own mind – a crucial ingredient for an installation like this.

Next door John Gerrard’s mesmerising Solar Pavilion/Flag is another piece of evidence that at the moment this artist can do no wrong. In 2003, his Cuban School installation at Galway seemed to propose hugeness over depth, as two vast screens showed Gerrard’s signature real time 3D renditions of a pair of decaying schools in the Cuban countryside. Subtract the scale and the technical wizardry and I found myself struggling for content. This year’s work is the exact opposite.

Four small screens show gentle renderings of four rivers: the Amazon, Danube, Nile and Yangtze. Local time passes in each as you watch hazy reflections of the rivers’ host cities flicker by. On each patch of water the rainbow iridescence of an oil spill shapes and reshapes – flags of pollution yet uncannily beautiful. The monitors are set in a specially-built burnt larch pavilion so the tang of charred timber lingers in the mind as you watch four rivers ripple. All art should smell this good.

Over at the Galway Arts Centre 12 artists respond to the 40th anniversary of the Golden Record: the encoded and condensed summary of global culture sent up on the pair of Voyager space shuttles in 1977.

“A billion years from now, when everything on Earth we’ve ever made has crumbled into dust, the Voyager record will still speak for us,” said Carl Sagan and Ann Druyan at the time.

Fast forward to today, and the overriding sensibility of this exhibition is of a quest to understand not ourselves, but “the other”. Works linger over the mysteries of alien sightings, seances, and otherworldly things – such as Dorothy Cross’ Skull Meteorite, a glowing digital photograph.

Meanwhile, spreading out from the gallery and down Dominic Street, Lucy McKenna’s In Perpetuity, is spelled out in vinyl lettering – a whole new alphabet that the artist says may yet become words.

At G126, Thomas Brezing, Sean Cotter and Gary Robinson also muse on words, and Cotter’s ink and charcoal works haunt the mind with glimpses of potential meaning. I’m reminded of some of Kathy Prendergast’s maps, although these grey-scale works are entirely their own.

Robinson gathers snatches of conversation, writ large into sculptures or lettered on to the walls. “When we’re in the car are we still outside?” I’m wondering still.

And there’s more: John Beard’s monumental paintings invite you to see Gericault’s The Raft of the Medusa like never before; while Olivier Grossetête asked the people of Galway to join him in creating a massive cardboard building in Eyre Square, and then joyfully knock it down again.

Meanwhile, Jamie Varten’s set for the show Woyzeck in Winter, a marvellous and kinetic cacophony of pianos, was better than a lot of installation art I’ve seen anywhere.

But that’s festivals for you. Art everywhere, and something to love in the most unexpected places.

Can you be racist against white people?
8 The 20th century belongs to America
9