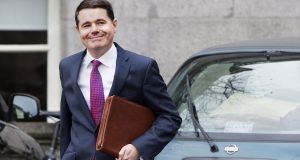 Minister for Finance Paschal Donohoe: both the National Campaign for the Arts (NCFA) and the Event Production Industry Covid-19 Working Group (Epic) have published their pre-budget submissions. Photograph: Paul Faith/AFP via Getty Images

In just over three weeks’ time, Minister for Finance Paschal Donohoe and Minister for Public Expenditure and Reform Michael McGrath will stand up in the Dáil to present one of the most consequential budgets in the history of the State.

Usually at this time of year, powerful sectors are hard at work promoting and protecting their own interests. Amid that noise, the voice of the arts and of the entertainment industry is barely and rarely heard.

This year, though, things are different. The National Campaign for the Arts (NCFA) has been intensively lobbying and engaging with Government for several months.

More recently, the Event Production Industry Covid-19 Working Group (Epic) has stepped up its own public campaign on behalf of the thousands of individuals and companies who have lost their livelihoods this year and indefinitely into the future.

These sectors will be the last to return to normality, a fact which needs to be recognised in Budget 2021

Both groups have published their pre-budget submissions and while there are, as you’d expect, some differences of emphasis, there are also significant overlaps. NCFA, as its name suggests, represents practising artists and is therefore more focused on direct State support via the Arts Council and other bodies.

Its current proposals form part of a much longer-term campaign to get State support for culture up to at least average European levels.

Epic, meanwhile, is a much more recently established organisation which seeks to represent the interests of the almost 20,000 full-time and part-time workers in live entertainment and events who currently face an utterly unexpected existential crisis.

But between them, the two organisations are giving voice to that part of the population whose livelihoods have been most drastically affected by the pandemic and the subsequent shutdown. These sectors will be the last to return to pre-Covid normality, a fact which needs to be recognised in Budget 2021.

The NCFA submission calls for an increase in funding to the Arts Council from €80 million in 2020 to €135 million in 2021, “with a view to at least doubling investment in the Arts Council by 2025”. The proposed increase looks eyewatering until you factor in the fact that the Government has already allocated tens of millions of supplemental spending to the arts in the last few months.

As things stand, even in the most benign scenario there’s no reason to think similar levels of support won’t be required next year. NCFA also wants more support for Culture Ireland, which promotes Irish artists’ work overseas, along with a range of other measures on issues including copyright, taxation and local authority spending.

Epic, most of whose members operate without State support or grant aid, now wants some of that aid to be extended in the form of a “scaffolding support fund” for commercial venues and companies whose existence is threatened by the crisis, along with specific stimulus packages for particular types of activity and a reduction in VAT on ticket sales.

If you look closer, you can also see some jostling for position going on in Epic’s demand that the recently announced cross-departmental taskforce for the sector, to be chaired by former managing director of RTÉ Radio Clare Duignan (who also sits on the board of The Irish Times), “will be a long-standing body with representation on the taskforce for the commercial live events sector relative to the size of the commercial sector versus the state funded sector”.

The sharp elbows are only to be expected: there’s always been some healthy tension and mutual scepticism between the two, although the reality is there’s no clear dividing line between them. The commercial events sector and the State-supported arts frequently share the same venues, employ the same performers and technicians, and pay the wages of the same bar staff, cleaners and ticket sellers.

Arts Council grants don’t mean you don’t have to put bums on seats (as the Gate theatre explained when announcing it will remain dark until box office revenue returns). And commercial events, from the Gaiety panto to the Body & Soul festival, have an enormous social, psychological and cultural value to the country in addition to the jobs they create.

We’ll see in a few short weeks what success NCFA and Epic have had with their lobbying efforts. Doubtless they won’t get many of the things they’re looking for. But the most important demand may be the one shared by both organisations: that the pandemic unemployment and wage subsidy schemes be reinstated at their original higher rates for the arts and entertainment sectors until mass gatherings are permitted again and cultural events can take place (the unemployment scheme has been particularly valuable for freelancers whose work dried up in March).

Since the new Living with Covid policy renders most live events financially tenuous or completely unviable, even at Level 1, it’s time for Donohoe and McGrath to make the special provision that their own policy requires.

Netflix’s Rebecca: The new Mrs de Winter isn’t a patch on the first one
3

50 scary films to watch at Halloween
9