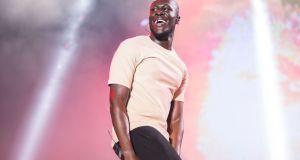 Students at a Dublin secondary school were among the first in the world to watch Stormzy’s new video. File photograph: Xavi Torrent/WireImage/Getty Images.

Stormzy has paid tribute to Chadwick Boseman in the music video to his new track Superheroes.

The animated video for the song from his album Heavy Is The Head is dedicated to the Black Panther star, who died aged 43 last month from colon cancer.

Boseman was best known for playing superhero T’Challa in the Marvel films, including the influential 2018 blockbuster Black Panther.

Students at a Dublin secondary school were among the first in the world to watch the video after Stormzy chose Pobalscoil Neasáin in Baldoyle as one of the locations for the premiere.

The rapper recorded a special video message for pupils at the school who earlier in the year organised a march at the height of the Black Lives Matter movement.

The end of the music video features a black screen with white text reading: “RIP Chadwick Boseman 1976-2020. Forever a Superhero in our hearts.”

The video, directed by British director Taz Tron Delix, also features tributes to rappers Little Simz and Dave and footballer Marcus Rashford, who has formed a child food poverty task force and forced the UK government into a U-turn over its free school meals policy during lockdown.

Please enjoy a snippet of our personal video message from the amazing, inspirational #STORMZY.
Don't worry, you pronounced our name (nearly) perfectly! Such an honour to be chosen. Fantastic video and an inspiring song. Thank you. #Superheroes #meas @Warnermusicirl @accsirl pic.twitter.com/bCYuP3kmbN

It features a young girl looking anxiously at herself in the mirror before she sees a picture of Little Simz on her wall and takes her hair down and smiles confidently.

It also shows grime star Dave leading protesters in masks at a Black Lives Matter rally, and a young girl playing football wearing a shirt with Manchester United striker Rashford’s name on the back.

The lyrics features references to the book Noughts And Crosses by Malorie Blackman, British actor and comedian Michael Dapaah, US tennis stars Serena and Venus Williams and includes quotes from the theme tune to British children’s show Tracy Beaker.

The video received its world premiere at schools in London, Glasgow, Dublin and Manchester, including Manchester Academy, the partner school of the Man Utd Foundation, on Wednesday morning.

Stormzy also sent a video message to pupils, saying: “Firstly, let me welcome you guys back to school. So you guys are about to be the first people on planet earth to see this video, it’s never been seen before, you lot are going to be the first to see it, so I’m very excited about that.

“I wanted to show it to you guys first, being students in school I think it’s important that you guys understand how powerful you are.”

He added: “We’re all superheroes, as much as we come from where we come from, we might be disadvantaged, we might have so many obstacles in front of us, you are a superhero in your own right, and don’t ever forget that.

“The sky is the limit, to let you know all those things inside of you make you incredible.”

Last month the #Merky Foundation, the charitable organisation set up by Stormzy, pledged £500,000 (€550,500) to fund further or higher education for young people from underprivileged backgrounds as part of its £10 million (€11 million) fund to tackle racial inequality and injustice.

In August 2018 he announced The Stormzy Scholarship, to fund two black British students to go to the University of Cambridge.

He has also set up #Merky Books, an imprint within Penguin Random House UK.