A video of the singalong at Big Tom's funeral in Saint Patrick’s Church in Oram, Co Monaghan, has gone viral on YouTube with over 200,000 views. The set was recorded by local video company Murphy Video Services. 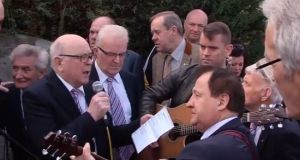 The throngs of mourners who attended his burial can be seen singing along to Never Grow Old.

A video of a singalong at Big Tom McBride’s funeral in Saint Patrick’s Church in Oram, Co Monaghan, has gone viral on YouTube with over 200,000 views.

The country singer died on April 17th aged 81 and was buried on April 20th. In the video the throngs of mourners, including Daniel O’Donnell and his sister Margo, can be seen singing along to Never Grow Old.

Big Tom started his lengthy career in country music in the early-mid 1960s as a member of the Mighty Mainliners Showband. After some years of traversing the length and breadth of Ireland on the ever-busy showband circuit, in 1966 the Mighty Mainliners appeared on RTÉ’s Showband Show, performing the song Gentle Mother, which gave the band their first sizeable chart hit.

From the early 1970s, the band name of Big Tom and the Mainliners was adopted. Other hit songs followed, with the band and during his solo career – Four Country Roads, The Old Rustic Bridge, Back to Castleblaney, Old Log Cabin for Sale and Broken Marriage Vows – in a career that effortlessly swatted away constantly evolving music trends.

It was the Irish heartland of the 1950s and 1960s that McBride was most used to engaging with, people who had emigrated from provincial towns and villages to (primarily) the UK’s midlands and north, where McBride continued to be immensely popular until ill health prevented him from touring.

Ireland’s ongoing love for country music has meant that McBride’s contribution to it was never forgotten. His influence on the likes of Daniel O’Donnell and the younger generation of country performers such as Nathan Carter can’t be underestimated.

Plus: Bruce Springsteen covers, The Cure and Camus, when inspiration behind The Pogues' Fairytale in New York