Mary and the Witch’s Flower review: We are not in Hogwarts anymore, Toto 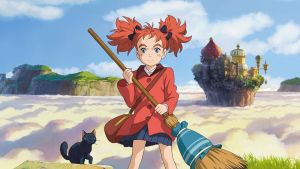 Mary (The BFG’s Ruby Barnhill) is a red-headed klutz holidaying at her great-aunt Charlotte’s estate, and providing much amusement for Peter, the local boy who likes to tease her.

On successive days, Peter’s two cats lead Mary to some unusual glowing berries and to a broomstick. After some fumbling, the enchanted twig springs to action, and Mary is whisked away to the Endor School for witches and warlocks, where the headmistress (Kate Winslet) and a mad scientist (Jim Broadbent) mistake her for their newest pupil.

A sign reading “Trespassers will be transformed” suggests this centre for alchemical excellence is not going to be as much fun as Hogwarts. So it proves.

In 2014, the animation world was rocked when Japan’s Studio Ghibli closed its doors. That threatened shuttering hasn’t been the full stop once feared. The production company behind movies like My Neighbour Totoro, Spirited Away and Princess Mononoke has subsequently co-produced The Red Turtle and the TV series Ronia, The Robber’s Daughter. Co-founder Hayao Miyazaki, too, has returned to the drawing-board, although fans will have to wait until 2020 for his post-retirement film, How Do You Live?

For the moment, Mary and the Witch’s Flower will do more than well enough. The debut feature from Studio Ponoc was produced by Ghibli veterans, including director Hiromasa Yonebayashi, and is dappled by Ghiblian allusion: the villainous, spider-armed Doctor Dee could be related to Spirited Away’s Kamaji; a talking flame recalls Calicfer in Howl’s Moving Castle; the broomstick rides revisit Kiki’s Delivery Service.

The new studio was named after the Serbo-Croatian word ponoc, meaning “midnight”, or “the beginning of a new day”, but they’re certainly not breaking with tradition.

In common with Yonebashi’s previous films Arietty (adapted from Mary Norton’s The Borrowers) and When Marnie Was There (adapted from Joan G Robinson’s book of the same name, Mary – a reworking of Mary Stewart’s The Little Broomstick – was inspired by English children’s literature, a transportation that allows spooky woodland forays and magical runes to co-exist with robots.