Unthinkable: Should virtue be taught in schools?

Some 2,400 years after Aristotle, fresh attempts are being made to develop character through the classroom 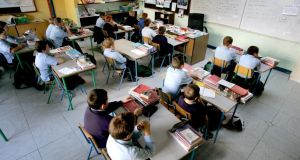 Fresh attempts are being made to teach moral character in the classroom. Photograph: David Sleator

Parents and educators are increasingly asking how best they can pass on values to young people in the absence of religion. Commonly, the discussion in Europe is framed around the need to identify moral teachings that are post-Christian in nature. But that ignores a wealth of pre-Christian philosophy.

In Aristotle’s day, people had a very clear concept of right and wrong without any reference to theology. Values to the ancient Greeks were synonymous with virtues, and “virtue theory” became their lasting contribution to ethics.

In our more secular age, this branch of philosophy appears to be making a comeback, and in education circles there are fresh attempts to teach character alongside literacy and numeracy in the classroom.

Much of the international activity in this field is emanating from the Jubilee Centre for Character and Virtues. The multidisciplinary research centre, based at the University of Birmingham and funded by the John Templeton Foundation, is exploring the effects of “moral education” on English schoolchildren. More than 15,000 pupils have completed its Knightly Virtues course, where they learn about medieval chivalry and extrapolate lessons for today.

The centre is now exporting such programmes in a bid to bring virtue on to the global curriculum. The centre’s director, Prof James Arthur, provides today’s idea: Successful moral education always involves interplay between the “caught” and the “taught”.

Can you teach children to develop virtues?

“Yes, you can. Aristotle’s method is all about nurturance and tacit modelling [indirect modelling approach], but it also foregrounds the salience of firm external guidance [direct teaching approach]. On the Aristotelian conception, then, virtues are both “taught” and “caught”, and the double benefit of deliberately teaching and learning from moral exemplars begins early on as one integral process.”

Different belief systems emphasise different virtues. Christianity, for example, reveres love; Buddhism reveres self-discipline, and so on. How should educators decide which virtues to prioritise?

“Yes, different belief systems and cultures will inevitably emphasise different virtues, but this does not mean

they exclude all the others. It is just a question of emphasis, and indeed, the possession of some virtues indicates you have many of the others too. Better to focus on what we have in common. The language is not too difficult, and each culture will recognise the language of virtue.”

How does story telling help in the teaching of virtue?

“Stories can awaken love for what is good. Since Aristotle viewed the development of emotions and motivation as crucial to the cultivation of moral virtues, he regarded exposure to narratives as playing a large role in the education of the desires and emotions which phronesis [or practical wisdom] is particularly concerned with to order and regulate.

“However, it must be recognised that knowledge of the virtues themselves will not necessarily change behaviour. A child may acquire some cognitive understanding, through direct teaching, of what would be the desirable virtue to display in certain circumstances, but be unable to translate this knowledge and reasoning into virtuous action.

“Virtue practice therefore constitutes the desirable and observable attitudes and behaviours demonstrated by a child. This is why the gap between recognising and understanding virtue, on the one hand, and performance of virtues, on the other, requires the example of lived modelling of exemplars.

“We need to watch others who have already acquired the virtues to help us choose the good life. Socially sensitive virtue literacy is about the ability to know, to understand, to feel, and to do what is morally appropriate in the given circumstances, and it requires considerable intuitive artistry – gained only through experience – in addition to a grasp of general moral truths. It requires children to be motivated, to be ready and to have the aptitude to learn from others.”

Do virtues make sense divorced from a specific religion or philosophy?

“Yes. Human flourishing is the aim of virtue education, which in turn forms good character. This involves disciplined explorations of profound questions, which means we need to develop the capacity to think – through a good education and through the people we meet and socialise with.

“People of excellent character are able to pursue a virtuous life because they have disciplined themselves to reject superficial conceptions of the ends worthy of pursuit. They have realised that there is more to life than getting and spending, and that the only truly rewarding life stories are the stories of virtuous lives. Each such life is a journey fraught with dangers and mistakes, but those who grow in virtue are among the truly happy.

“I often tell people we were speaking about virtues long before Christianity.”

Is there resistance today to introducing the notion of ‘virtue’ in the classroom?

“Sometimes, but we have not experienced it. Parents want it, and children find it interesting because it meets questions they ask about why some people bully them or why certain things are important. Children are concerned about virtues like trust, honesty and justice.

“So the opposition sometimes comes from academics, not generally teachers. Academics are sometimes thinking that character building with virtues is about indoctrination, but it is about teaching them to choose and be critical while making wise choices.”