Unthinkable: How do you judge good art from bad?

‘The best art affects you as an individual,’ says art theorist Hugh Moss 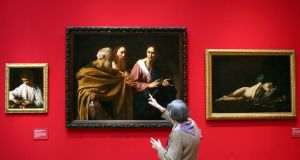 As time goes on there seems to be less agreement as to what exactly constitutes art. Consider a Caravaggio painting, a shark in formaldehyde, Duchamp’s Fountain and Tracey Emin’s tent. Do all these really belong in a gallery?

As Hugh Moss, author of the newly published book The Art of Understanding Art, says: “It seems we are suffering a serious art-theoretical lapse.” Most art theories “go round and round in circles only to disappear up their own dictionaries”.

Moss, a painter, gallery owner and expert in Chinese art, attempts to provide a unifying theory that is generous enough to include a broad range of artistic pursuits but rigorous enough to disqualify vacuous self-indulgence.

His solution is to describe art as something central to “the evolution of human consciousness”, an answer that becomes less straightforward on further inspection.

Moss is in the Unthinkable chair this week to explain his thesis but also to advance an idea expressed with some artistic playfulness in his book. As an aid to intellectual humility, he suggests we might concentrate now and again on the fortuitous series of events that brought about human consciousness in the first place. Or as he puts it: “A little gratitude to accidental circumstance might be in order – perhaps, one day, an international holiday to celebrate chance?”

“Consciousness is a tricky one and remains somewhat woolly. The theory is that art serves an all-encompassing single purpose that incorporates and subsumes all its immediate roles, whether they be decoration, inspiration, education or any other purpose for expressing one’s responses to experience.

“It is one of the most powerful means of expressing that which the intellect cannot cope with adequately, as well as a means of expressing that which it can at a number of satisfying levels. It is an infinitely flexible language, and can act, once recognised as such, as an efficient vehicle in moving from the normal, everyday, intellectual mode of knowing to the transcendent. Meditation is another, and many artists will tell you that the act of creating is meditational.”

How does one know whether one art work is better than another?

“The best art is that which affects you as an individual. First it must catch your attention, then draw you in, then move you in some way – whether it makes you think or changes the way you think or, like great music, just makes you feel so much better for having become involved. From this and a thousand other experiences of creativity, your understanding will be broadened. You may be tempted to look into the artist and his or her background to understand a little better what it was that so moved you. You may go so far as to explore their cultural background, and art history in general: ponder how it changes within a culture over time and how it changes cultures.

“The physical work of art is just a doorway to an infinite realm of exploration, which is also a creative response to experience, so the audience is as important as the artist. No one has to agree with you at that point as to what is good/bad, worthy/unworthy etc. Consensus, however, over time, will keep track of the art which moved more rather than less people, so eventually you will have a collective opinion of what is great art – even though you don’t have to agree with it.”

To understand a piece of art, then, must you experience it rather than just observe it?

“Observing it is part of experiencing it, but both are part of a broader process again. You need to become involved, to really look, really see, and this is an immensely rewarding and consciousness-enhancing process. Learning how to see is a crucial part of that process. We all have eyes, we all look, but it is all too easy with something a little esoteric to just bounce off the surface.

“Look at Naomi Campbell in a bikini and most blokes will pay a lot of attention, but given an abstract painting or an installation they’ll usually just bounce off the surface and move on. Learning to delve beneath the surface of the art process and grasp its inner languages and meaning – its esoteric, sage levels of communication – is an integral part of how art works in evolving consciousness.”

I liked your idea of an international holiday to celebrate chance; can you explain why you would propose such a thing?

“It was a raised glass to toast the truth that there is no discernible purpose in the universe other than that which we have invented as humans: religions, etc. We arrived at the ability to do so by chance, an incredible series of circumstances the odds against which are utterly ridiculous – although the multiple-universes theory reduces them to certainty.

“If you are going to have a holiday to celebrate chance, it would, of course, have to be on an unspecified day with no particular events planned, so the only logical conclusion is a bit quantum- mechanical really: every day is potentially the day to celebrate chance, but we won’t know which day it actually is until it occurs. We could, of course, look for clues. It might, for instance, be significant if one night we wander in to our usual local and there is a box on the bar with a dead – or possibly a live – cat in it. That would be excuse enough for me.

“This would be a very Irish holiday, and for the creatively workshy could translate into 365 days off a year – 366 in a leap year. As a holiday this has distinct possibilities.”