Unthinkable: Are public manners in a state of decline?

Since announcing his intention to run for the US presidency in June 2015, Donald Trump has regularly made headlines for his controversial comments - here are some of his more noteworthy musings of the year. 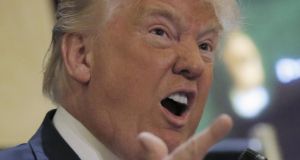 Donald Trump: the US Republican presidential contest has become uncivil

Examples of bad manners in public life are not hard to find. Take the average online debate on religion, gender or migration. Or the stump rhetoric of Republican presidential nomination contender Donald Trump in the United States.

There is nothing new about sharp insults or personalised attacks in politics but, according to Prof John A Hall of McGill University in Canada there are modern factors that are adding fuel to the fire. These include the deepening inequalities in society, which militate against a sense of community.

New technology, meanwhile, can play a role in both bringing people together and creating a safe distance for hurling abuse.

Prof Hall is in Dublin this week to deliver a talk, The Importance of Being Civil (which is also the title of a book he has written on the subject), as part of a public lecture series organised by the sociology departments of TCD and UCD.

He acknowledges civility is a “strange” concept – some might say contradictory – by embodying a “shared” recognition of difference. Nonetheless, he states: “Civility is crucial because it seeks to recognise difference, thereby removing fears and allowing for co-operation.”

The Oxford English Dictionary defines “civility” as “politeness”. But surely sometimes it’s good to be rude, or at least impolite? Put another way, can you make social progress without offending people?

“Yes, there is a case to be made against civility. It can be so laden with assumptions that it curtails discussion, makes it hard for outsiders of all sorts to take their place and to change things. Bluntly, the Irish were once seen by the English in these terms.

“All of this is to say that the term is, or ought to be, as the philosopher Walter Bryce Gallie once put it, ‘essentially contested’. But I still want to endorse the term – with warnings – for at least two reasons. One is a little academic: everyone thinks civil society is a good thing. Another is that we need language to help us understand how deeply divided societies can move to a better place.”

How can you persuade people to be civil if they can’t see a problem with how they’re behaving, or if they dismiss civility as a kind of moral relativism?

“It is hard. In sociological terms the greatest incentive to move forward has been negative: long periods of suffering and stalemate have sometimes led people to realise that it is better to live together, without winning everything, rather than to continue to fight. But reluctant acceptance can lead to something more: to endorsement of a situation of tolerance and variety.

“Civility is not relativist. Its great hero is Montesquieu, who was relativist about most matters but insisted nonetheless that some few matters were subject to universal standards. We can all feel pain and so should seek to eliminate it, albeit there simply is no general standard for pleasures on which we can agree.”

Is religion inherently uncivil by dividing the world between the saved and the damned?

“There is a huge difference between public and private religions. The former can indeed be intolerant. Remember St Augustine using the power of the Roman state once it was available to suppress the Donatists. But religion can become more private, as has largely happened to Christian belief in the West.

“Many Muslims would like their belief to be a private matter, but the public side of the religion remains strong, in some part because of its confidence – that is, because it seeks less than Christianity to separate religious from political power.”

You write in the book that “competitive consumption is a support to civility”; how so?

“The phrase is incautious, at least out of context. Two points are worth making. First, I follow Samuel Johnson and Maynard Keynes in believing that money-making is innocent compared to seeking political power – and would add that consumption is not just consumption, it is also about the freedom to express ourselves. But, secondly, this is only possible when the economy holds out basic prospects for everyone in society.

“Greater social inequality may start to rule that out, and so stands as a threat to civility.”

Why has the US Republican presidential contest become so uncivil? Does it represent a broader decline in public manners?

“The deepest of all reasons is race, that is, the fact that that the US is still traumatised by its poisonous legacy. The Republicans are torn here, many loathing immigrants and blacks but with the elite trying to find ways to stay in power by expanding from its ever-whiter base.

“Two more points: the nativist character of the protests draws on a long US political tradition, while there is truth to the idea that the harsher voices come from those badly affected by economic change. And this is the answer to your next question.”

Yes, I was going to ask: how is technology impacting on civility?

“Some sociologists claim that technological change now will not, unlike prior periods, provide jobs. If that is so, we may be in for trouble – in Europe and in the US.”

Sex and Lies review: testimonies from women in Morocco
8

The best classical music and opera to see this week
10