President leads tributes to writer and member of Aosdána, who died aged 90 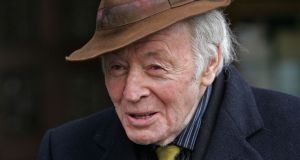 The funeral of writer, poet and historian Ulick O’Connor will take place in south Dublin on Friday.

Mr O’Connor died on Monday, aged 90. His funeral will take place at the Church of the Three Patrons, Rathgar Road, at 10am, and will be followed by burial at Deansgrange cemetery in Blackrock.

Mr O’Connor was a barrister for 15 years before becoming a full-time writer. He was also a member of Aosdána.

He wrote biographies of Oliver St John Gogarty and Brendan Behan, as well as books on the Troubles and the Celtic revival and several poetry collections, including Lifestyles in 1973, All Things Counter in 1986 and The Kiss: New & Selected Poems in 2009.

President Michael D Higgins extended his condolences to Mr O’Connor’s family, friends and “all those whose lives he touched in so many ways”.

“His commitment to performance will be remembered fondly as well as his lifelong support for actors and their livelihoods,” Mr Higgins said.

“I was proud to have him as a friend.”